One strategy for selecting top stocks is to track insider transactions. After all, if insiders are dipping into their own pockets you can imagine it’s because they believe the stock looks compelling. A Harvard study revealed that insider purchases earn “abnormal” returns of more than 6% per year. The authors of the study conclude that insider buyers “have a good feel for near-term developments within their firm.”

The advantage of following these insiders isn’t just that they are privy to data which the rest of us don’t necessarily know – it’s also that they are held responsible for their decisions. Company officers can’t just make trading choices based on personal preference or profit. They must account for their choices to board members and shareholders – and that audience wants to make money, too. So, when corporate insiders start buying up stock in their own company, it’s a strong signal for investors.

Bearing this in mind, we used the Investing Insights platform to point us in the direction of three “Perfect 10” stocks the insiders are snapping up. The platform gives every stock a single-digit score, based on a summing up from 6 separate factors. The factors used are known to correlate with future overperformance; when they align together it’s a strong indication for buyers to consider. Let’s take a closer look.

We’ll start in the health insurance industry, where Bright Health Group (NYSE:BHG) takes a different approach to health care coverage. Instead of focusing on the needs of large corporations and major providers, the company aims to take a ‘consumer centric’ approach to health insurance, matching policies to the needs of the end user. Since its founding in 2016, the Minnesota-based insurance provider grown rapidly, and now claims over 660,000 policy-holding customers.

The biggest news items from Bright in recent months have been the company’s IPO and its 2Q21 earnings report. The IPO was held at the end of June, and Bright put 51.35 million shares of common stock on the public market, with an initial price of $18 each. This was lower than the original target range of $20 to $23 per share, and the offering brought in over $924 million in new capital.

In the Q2 report, Bright’s first as a publicly traded entity, the company reported GAAP revenues of $1.11 billion, a 275% gain from the year-ago quarter. The revenue gain was driven by an equally impressive gain in membership of the course of the year; from 2Q20 to 2Q21, Bright’s membership grew 220%, from 207K to more than 662K. In addition to the organic revenue gain, Bright also saw a one-time increase in investment income, or $58.5 million from unrealized equity security gains.

Turning to the insiders, two members of Bright’s Board of Directors have recently made major purchases, pushing the insiders sentiment strongly positive. Manuel Kadre bought 50,000 shares, spending $432,500 for them. And Jeffery Immelt, best known as the former CEO of General Electric (NYSE:GE), bought 114,000 shares for just over $1 million.

BHG has also caught the attention of RBC’s 5-star analyst Frank Morgan, who wrote after the recent earnings release: “We found nothing in the second quarter that would derail our investment thesis… Bright Health Group posted solid 2Q21 results, which as expected, reflect strong IFP membership growth and favorable operating cost development on increased scale. Adjusted EBITDA, while still a deficit, was favorable to consensus, though we should note that quarterly seasonality assumptions varied significantly heading into the print. Consensus was stronger around full year-revenue, which is bracketed by management’s initial guidance, with MCR also falling in line…”

In line with these comments, Bright rates BHG shares an Outperform (i.e. Buy), along with a $22 price target. Should his thesis play out, a potential upside of ~161% could be in the cards.

Overall, 9 analysts have reviewed BHG since its IPO, and of them, 7 recommend a Buy against 2 Holds, setting up the Strong Buy consensus rating. The shares are priced at $8.44 and their $20.11 average price target suggests ~138% upside in the next 12 months. (See BHG stock analysis) 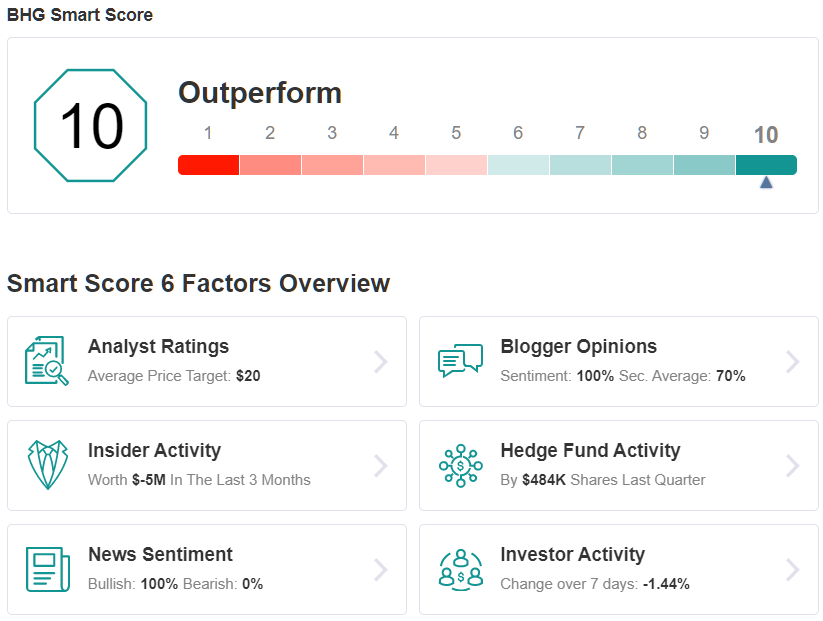 Sticking with the insurance sector, we’ll turn our gaze on Kemper Corporation (NYSE:KMPR). This company, with its Chicago headquarters, $4.1 billion market cap, and nearly $15 billion in assets, is a major provider of insurance products, issuing policies for individuals, families, and businesses. The company provides a full range of insurance, including property and casualty, life and accident, and health coverage.

Kemper’s stock has been volatile in the past year, but over the past two months the company has seen some positive news. In June, Kemper received an outlook upgrade from Moody’s, the credit rating investor service. Moody’s bumped Kemper’s outlook from stable to positive, based in part on the company’s position as ‘a leading non-standard auto insurer.’

In July, Kemper released its 2Q21 numbers. These contained both good and bad news. The total revenue, of $1.5 billion, was up 22% year-over-year, and was the best print in over two years. The red side of the ledger, however, the company ran a severe net loss in the quarter, of 97 cents per share. This was deeper than expected, and far worse than the year-ago quarter’s net profit of 79 cents per share. Management attributed the loss to “industry-related environmental challenges that impacted earnings.” These included a significant increase in auto claims severity and frequency, occasioned by the reopening of the economy, and inflationary pressures.

The headwinds did not prevent Board member Stuart Parker from buying up 25,000 shares of the stock, however, and pushing the insider sentiment positive. Parker paid $1.54 million for the shares.

JMP analyst Matthew Carletti is bullish on Kemper, writing of the insurer: “We have a high degree of confidence in management’s ability to guide the business through what will be a more volatile 6-12 months for the industry as we exit the pandemic, but likely ultimately put the company in a much stronger position as it takes advantage of market dislocations. In the nearer term as the economy has rapidly begun to reopen, the auto sector is facing both frequency and severity pressures as miles driven spike toward pre-pandemic norms and both parts and labor face elevated inflation…. For investors willing to look a little longer term, we believe Kemper is well positioned to take advantage of market dislocation and come out the other side in a stronger position.”

To this end, Carletti sets a $90 price target with an Outperform (i.e. Buy) rating on KMPR stock. His target implies an upside of ~35% in the coming year.

This is a stock with a unanimous Strong Buy consensus rate, based on 4 positive reviews set in recent weeks. The shares are priced at $66.89 and their $82.50 average target indicates room for ~23% appreciation from that level. (See KMPR stock analysis) 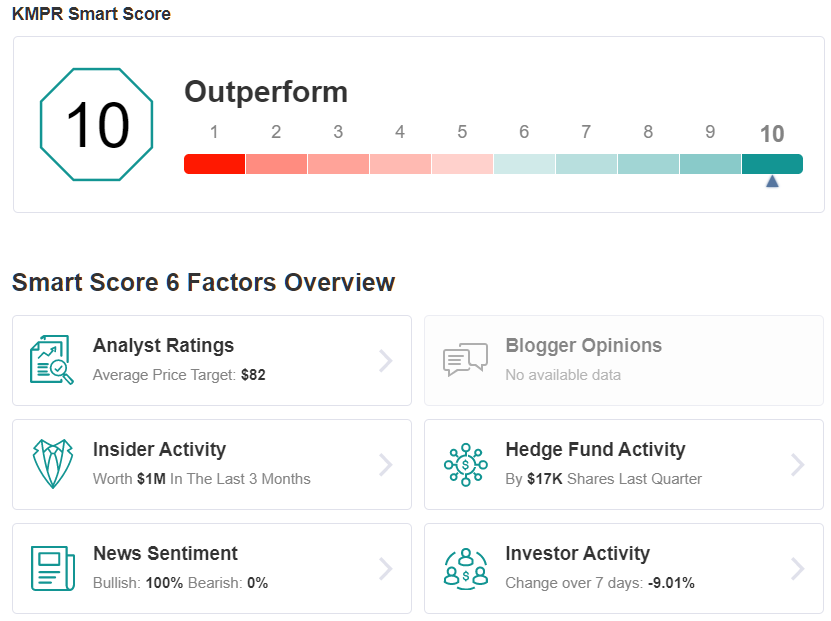 Last up, PROG Holdings Inc (NYSE:PRG), spun off of Aaron’s Inc, the rent-to-own company, at the end of last year. PROG, which is short for Progressive Leasing, started trading publicly as a stand-alone company in December 2020, and now comprises three segments. The first, Progressive (NYSE:PGR) Leasing, provides consumers with lease-purchase options on a wide range of products, including appliances, electronics, furniture, jewelry, mobile phones, automotive accessories, and more. The second, Vive Financial, makes financing options available to customers who may not quality for traditional prime lending. And finally, Four Technologies brings a fintech payment platform to PROG’s customers, including a buy now-pay later option.

Since spinning off the parent company, PROG has established itself as a leading lease-to-own company. In this vein, July was a busy month. At the start of the month, PROG completed its acquisition of Four Technologies, integrating the buy now-pay later functionality into the company’s fintech capabilities.

In mid-July, PROG expanded its e-commerce capabilities, with new app plug-ins to simplify retailer integration and customer application. The upgrades will allow customers to shop, start a lease, and complete the checkout through the retailer’s website, while receiving quicker decisions on the lease-to-own applications.

And finally, at the end of July, PROG released the 2Q21 numbers, beating the expectations on both revenue and earnings. At the top line, the company reported $660 million in total revenue, up 10% yoy and just edging over the forecast by 0.7%. EPS, at $1.02, was up 18%, and clobbered the expectation of 86 cents.

On the insider front, sentiment is positive after two large buy from company officers. CFO Brian Garner spent over $107,000 on 2,500 shares of PRG. Making a larger purchase, CEO Steven Michaels bought 7,500 shares for $321,000.

Kyle Joseph, 5-star analyst with Jefferies, points out the obvious strengths PROG has shown, and lays out his view of the company’s prospects.

“Credit performance remained strong, as write-offs of 4.8% declined 130 bps YoY and remain below PRG’s long-term loss target of 6%-8%. The balance sheet remains strong, as PRG closed 6/30 with net cash and $300M of undrawn capacity on its revolver despite repurchasing $49M of stock and buying Four (BNPL provider) for $23M in 2Q,” Joseph noted.

The analyst added, “We think the accelerated GMV growth and improved guidance indicate that PRG will benefit as the economy continues to reopen. While we expect credit to normalize, we see offsetting factors, including lower buyout activity/better GP margins and stronger demand for credit from consumers. We remain favorable on PRG, given its strong position in what we consider a rapidly growing market.”

All in all, Joseph rates PROG shares a Buy, with a $67 price target to suggest room for ~47 one-year upside.

We’re looking here at another stock with a unanimous Strong Buy consensus rating, this time based on 3 positive reviews. PRG shares are priced at $45.72 and have an average price target of $65.67, giving the stock a one-year upside potential of ~44%. (See PRG stock analysis) 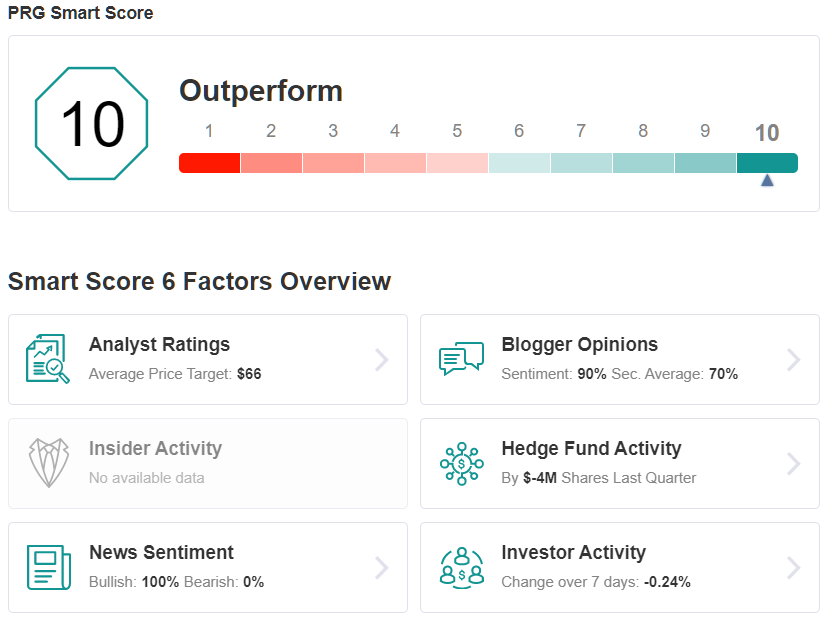 Lowe’s Stock Drops As Home Improvement Trend Could Fade Out 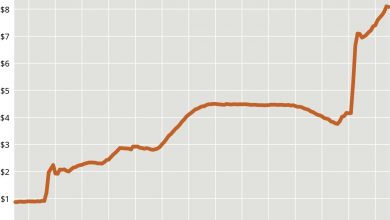 Painting Of The Tape By Jerome Powell 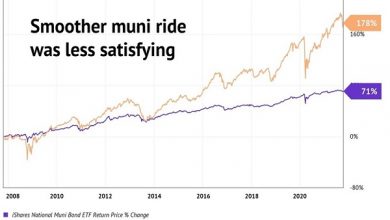 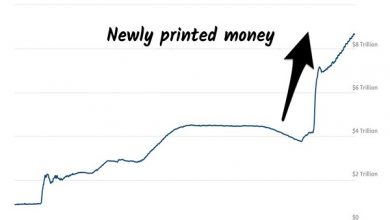