European and US equity indices traded in the red yesterday, with investors staying concerned over the coronavirus and its new variant. Fed Chief Powell’s hawkish remarks before the Senate Banking Committee may have also resulted in some stock selling.

In the UK, due to the new covid-related restrictions, market expectations over a BoE rate hike have been pushed into the new year, while in the EM world, the lira fell again after Erdogan endorsed a lowering-rates policy.

The US dollar was found lower against all but two of the other major currencies during the early European morning today. It gained some ground only against JPY, while it was found virtually unchanged against GBP. The greenback underperformed versus NZD, AUD, CAD, EUR, and CHF, in that order. 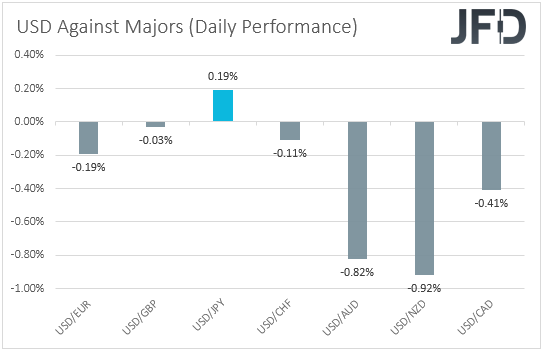 The weakening of the US dollar and Japanese yen, combined with the strengthening of the risk-linked Aussie, Kiwi and Loonie, suggests that markets may have turned to risk-on at some point yesterday or today in Asia. Indeed, turning our gaze to the equity world, we see that European and US indices were a sea of red, but the Asian ones traded in the green. 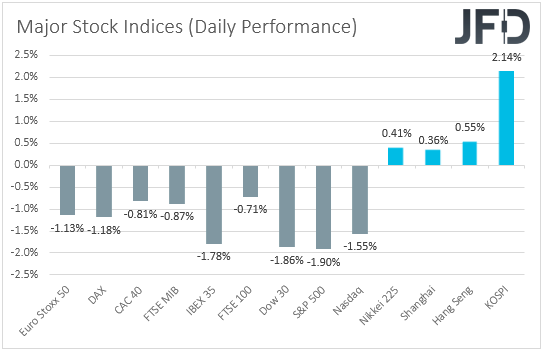 In our view, there was no significant catalyst for the change in investors’ morale during the Asian session today, and thus, we will see the recovery as another corrective bounce. We believe that investors remain concerned over the new Omicron variant of the coronavirus and what economic impact the new restrictive measures around the globe could have.

On top of that, yesterday, we got to hear from Fed Chief Jerome Powell again, who testified before the Senate Banking Committee. Due to the new COVID variant, he may have expected to adopt a more cautious stance concerning monetary policy.

Nonetheless, he appeared surprisingly hawkish, saying that maybe it is time to drop the “transitory” description for inflation and that due to the increased risk of higher inflation, they should consider ending their QE program a few months sooner than previously anticipated.

This allowed market participants to maintain bets over a potential rate increase in August and another one by the end of next year, which may have added some extra pressure to the EU and US stocks. The US dollar initially strengthened but came under selling interest today, during the Asian morning, when sentiment improved. 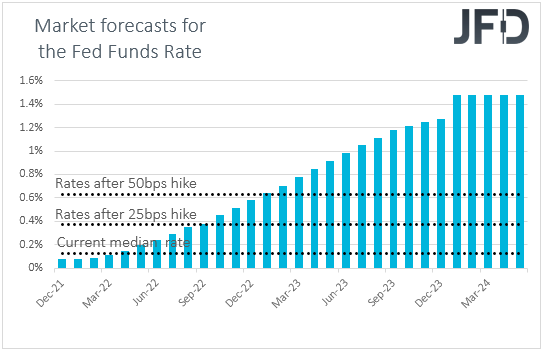 Contrary to new market expectations around the Fed plans, due to fresh coronavirus-related worries, bets around a December hike by the BoE have declined, with market participants now believing that officials may prefer to wait and act after the turn of the year.

This is what may have pushed the British pound lower against its US and Eurozone counterparts early yesterday. However, due to its strengthening correlation with risk-sentiment lately, the pound sterling rebounded later the day and earlier today to recover all the lost ground. 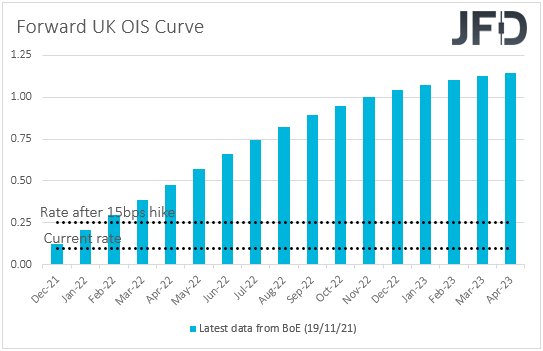 In an interview, Erdogan said that there is “no turning back” from the new policy direction and that further fall in interest rates will improve the exchange rates before the elections.

Under pressure from Erdogan, the Turkish central bank has slashed rates by 400 bps to 15% since September, and it is expected to cut again in December. With inflation near the 20% mark, this will result in even more negative real rates, and thereby, more capital outflows. 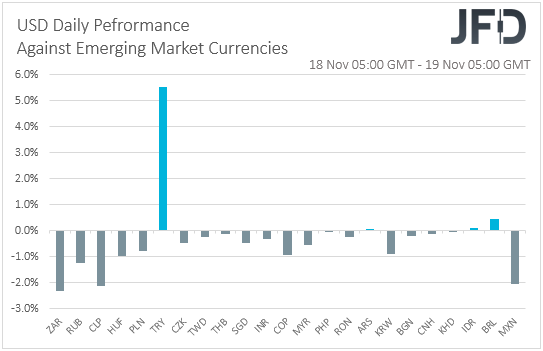 The Dow Jones Industrial Average cash index traded lower yesterday, after hitting resistance slightly below the 35300 zone, marked by Monday’s high. That said, the fall was stopped near the 34430 area, and then the index rebounded somewhat. Overall, the price structure continues to be of lower highs and lower lows, and thus, we will maintain a negative stance.

The latest rebound may continue for a while more, but we do see decent chances for the bears to retake charge from near the 35000 territory and push the index down for another test near the 34430 area. A break lower will confirm a forthcoming lower low and extend the fall towards the 34120 territory, marked by the low of Oct. 13.

If that barrier doesn’t hold either, the next area to consider as a support may be at around 33815, marked by the lows of Oct. 4 and 5.

On the upside, we would like to see a strong recovery back above 35600 before we start considering the bullish case again. This could allow advances towards the peak of Nov. 25, at 35960, the break of which could encourage buyers to climb towards the high of Nov. 16, at 36315.

GBP/USD traded lower yesterday after it hit resistance at the downside resistance line taken from the high of Oct. 28. Then, the fall triggered some buy orders near the 1.3195 territory and rebounded somewhat. That said, the pair remained below the aforementioned downside line, and thus, we will consider the short-term downtrend to be still intact.

We believe the bears will retake the charge soon and perhaps push the action back below 13280, aiming for another test near 1.3195. A break below that barrier will confirm a forthcoming lower low and could extend the fall towards the 1.3130 barrier, marked by the low of Dec. 11, where another break could allow extensions towards the 1.3060 area, marked by the inside swing high of Oct. 28.

To start examining the bullish case, we would like to see a decisive break above 1.3450, the high of Nov. 22. The pair will already be well above the pre-mentioned downtrend line and may travel towards the 1.3510 zone, resistance on Nov. 18 and 19. Further advances could target the 1.3580 or 1.3607 zones, and if neither can stop the buyers, we could see them sailing towards the 1.3700 area, marked by the high of Nov. 4.

We recieved the final Markit manufacturing PMIs for November from the Eurozone and the UK. The US ones are due. The ISM manufacturing index for the month is also coming, and it is expected to have inched up to 61.0 from 60.8. What’s more, Fed Chief Powell will present his testimony before the House Financial Committee. 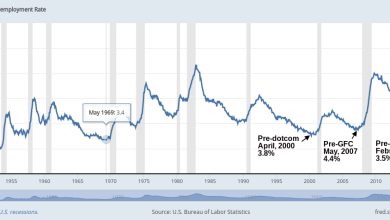 Inflation Vs. Recession: Can the Federal Reserve Engineer A Soft Landing? 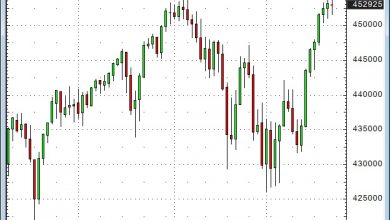 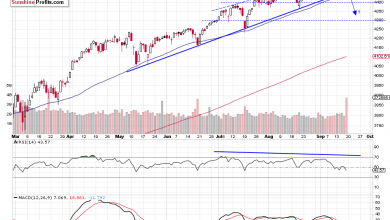 With S&P 500 Heading Much Lower, Is This A Dip-Buying Opportunity? 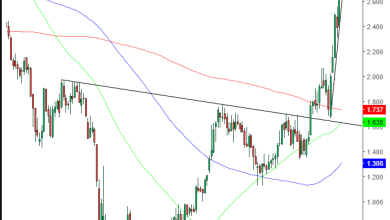