While I’ve been warning for months that the US Federal Reserve (FED) will likely taper its asset purchases much sooner than investors expect, enlightenment struck the financial markets on Aug. 18.

To explain, with the FED releasing the minutes from its July 27/28 policy meeting, “most participants judged that the Committee’s standard of ‘substantial further progress’ toward the maximum-employment goal had not yet been met. At the same time, most participants remarked that this standard had been achieved with respect to the price-stability goal.” For context, this means that FED officials are now acknowledging surging inflation…

“The staff’s near-term outlook for inflation was revised up further in response to incoming data, but the staff continued to expect that this year’s rise in inflation would prove to be transitory.” 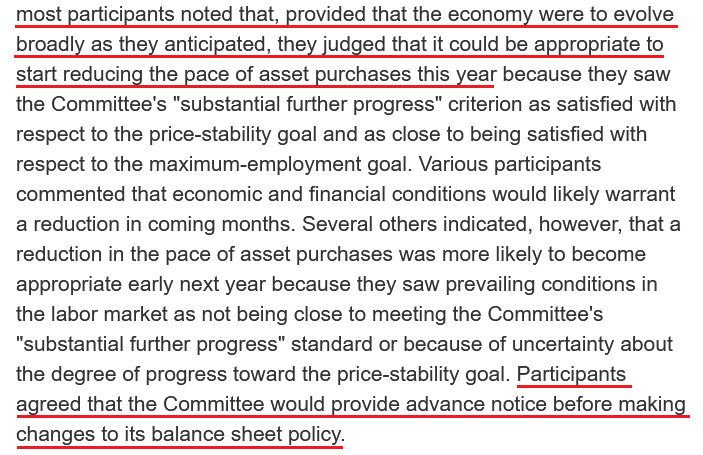 As a result, with the phrase “most participants” indicating a hawkish majority, the idea that “the Committee would provide advance notice before making changes to its balance sheet policy” also means that the taper timeline remains on schedule. For example, while the Delta variant has the potential to delay the fireworks, our projection of a taper announcement at the FED’s September 21/22 policy meeting (or even during the Jackson Hole Symposium) still looks quite prescient. When you combine “it could be appropriate to start reducing the pace of asset purchases this year” with the promise of “advance notice,” it means that an announcement will have to commence in September or October for an official slowing of the FED’s bond-buying program to begin in December. As a result, the PMs’ medium-term outlook remains quite treacherous.

What’s more, the FED’s report also highlighted several financial stability risks. And with tightening financial conditions the only prescription for the ailment, the stars are likely aligning:

“The staff judged that asset valuation pressures were elevated. In particular, the forward price-to-earnings ratio for the S&P 500 index stood at the upper end of its historical distribution; high-yield corporate bond spreads tightened further and were near the low end of their historical range; and house prices continued to increase rapidly, leaving valuation measures stretched.”

Furthermore, amidst the FED-induced chaos on Aug. 18, the central bank’s daily reverse repurchase agreements also hit another all-time high. And with 82 counterparties siphoning nearly $1.116 trillion out of the financial system, the liquidity drain continues to accelerate.

To explain, a reverse repurchase agreement (repo) occurs when an institution offloads cash to the FED in exchange for a Treasury security (on an overnight or short-term basis). And with US financial institutions currently flooded with excess liquidity, they’re shipping cash to the FED at an alarming rate. And while I’ve been warning for months that the activity is the fundamental equivalent of a taper – due to the reduced supply of US dollars (which is bullish for the USD Index) – the psychological effect pales in comparison. However, with the chorus growing louder, an official taper announcement will likely occur sooner rather than later.

In addition, while I’ve been sounding the alarm on inflation as well, the “transitory” narrative is losing clout with economists. Case in point: while ‘peak’ and ‘slowing’ inflation have dominated the news cycle, economists’ consensus estimates remain on the up and up. 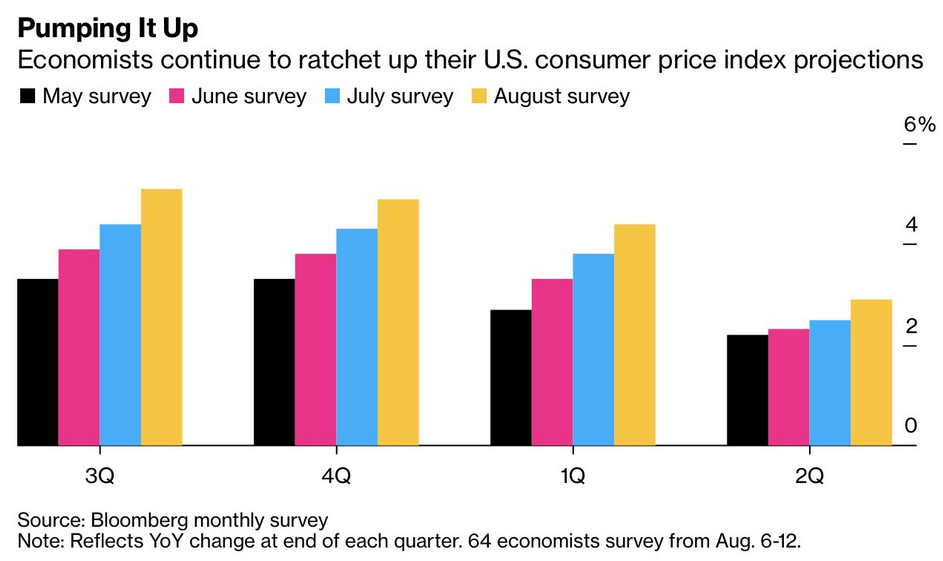 To explain, the various bars above depicts economists’ consensus estimates for the year-over-year (YoY) percentage change in the core Consumer Price Index (CPI) over the next four quarters. And not only is there a clear uptrend, but economists once again increased their estimates in August (the gold bars).

And for good reason: Krispy Kreme (NASDAQ:DNUT) – an American doughnut company and coffeehouse chain – revealed during its second-quarter earnings call on Aug. 17 that “Q3, which is typically a seasonally softer quarter, is expected to see increased pressure from wage and commodities inflation, especially in the US.” Moreover, CEO Michael Tattersfield added:

“I must admit, the commodity pressure in the short-term has just been quite extraordinary.”

On top of that, with enhanced employment benefits putting upward pressure on wages, he said:

“A temporary increase in training costs and associated overtime plus increase wage inflation pressures are impacting short-term margin growth…. We are seeing wage inflation typical that you’re seeing across the industry, and actually in line with our expectations.”

And how is the company responding to the inflationary pressures?

Likewise, data from Nordea implies that wage growth still has room to run. For context, with the US Employment Cost Index (ECI) rising by more than 3% YoY in Q2, wage inflation is now at its highest level since 2008. To that point, Nordea also compared the YoY ECI metric to the US Bureau of Labor Statistics’ (BLS) quit rate. And with that, the potential for wage inflation is even more striking. 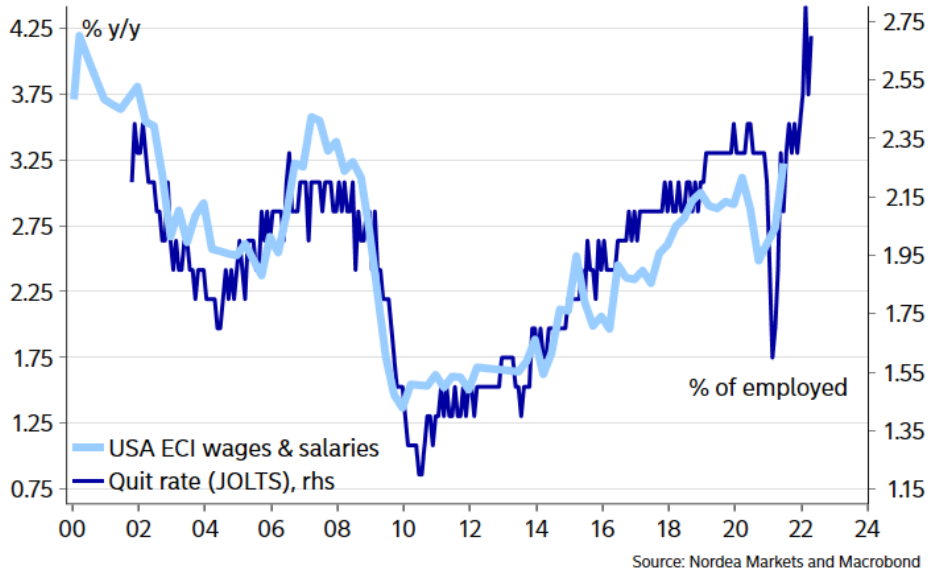 In addition, while I’ve been warning for months about the forthcoming tsunami, the US government’s measure of rent inflation is still extremely subdued. 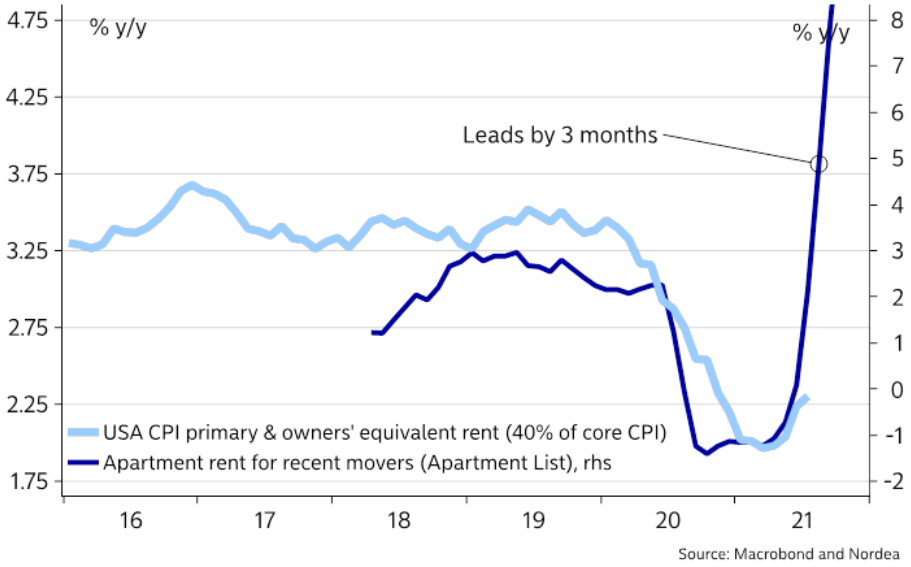 For context, I wrote previously:

Finally, with “substantial further progress” hinging on the FED reaching its full-employment mandate, US nonfarm payrolls are the canary in the coal mine. And while the Delta variant may have affected hiring growth in August (?), the employment tailwinds remain: 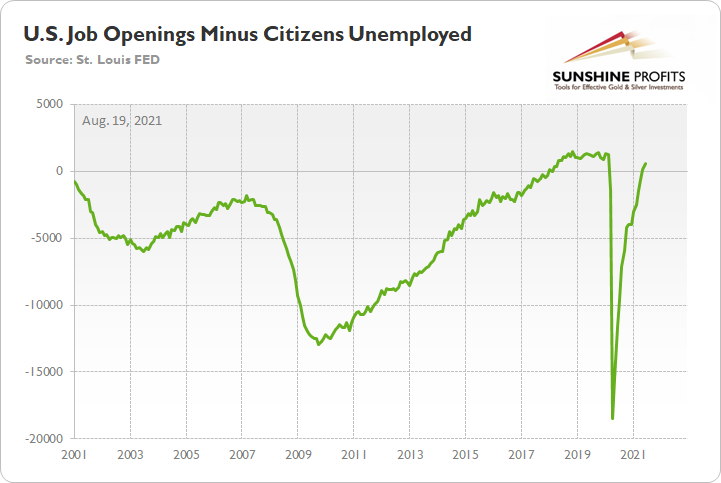 To explain, the green line above subtracts the number of unemployed US citizens from the number of US job openings. If you analyze the right side of the chart, you can see that the epic collapse has completely reversed, and the green line is now in positive territory. Thus, with more jobs available than people looking for work, it’s only a matter of time before “substantial further progress” materializes.

In conclusion, volatility rocked the financial markets again on Aug. 18, as the FED’s minutes struck a negative chord with investors. And with gold mining stocks caught up in the plunge, their continued underperformance of gold remains profoundly bearish. What’s more, while the USD Index remained surprisingly subdued, the US 2-through-10-year yields rallied once again. As a result, the PMs’ medium-term outlook is growing colder by the day. 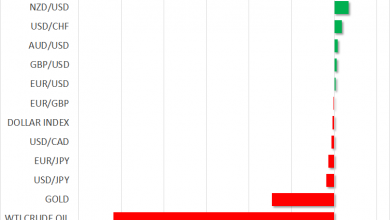 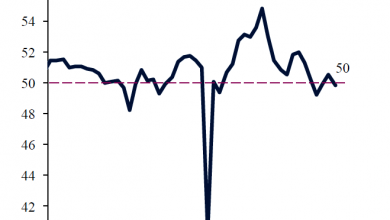