The gold miners’ stocks are still running higher in a mounting upleg.

The sector gains accelerated into mid-April, spawning fears of overbuying. While somewhat stretched, gold stocks’ leading benchmark remained near potentially-terminal levels. So there’s still lots of room for this latest gold-stock upleg to keep powering higher. Like usual, its gains won’t be linear but will flow and ebb with gold.

The gold-stock sector’s most-popular index remains the GDX VanEck Gold Miners ETF (NYSE:GDX). Launched way back in May 2006, it parlayed its first-mover advantage into an insurmountable lead. GDX’s $16.2b of net assets this week its next-largest competitor’s, the VanEck Junior Gold Miners ETF (NYSE:GDXJ). The much-bigger GDX is dominated by major gold miners, whose stocks have enjoyed a great run.

Gold stocks’ latest upleg is their sixth of this secular gold bull, born back in mid-December 2015. Since GDX’s latest major interim low in late September, this leading sector ETF has rallied 41.4% at best in 6.6 months. That nicely leveraged gold’s parallel 14.6% gain in this span by 2.8x, on the higher end of GDX’s usual gold-price-move amplification range of 2x to 3x. But this upleg is than that implies.

Hawkish Fedspeak battered both gold and its miners’ stocks sharply lower in late January, where GDX carved a secondary bottom just 1.3% above late September. So an overwhelming 29/30ths of gold stocks’ upleg-to-date gains in just the last 2.7 months! To surge so fast, gold stocks had to blast up dramatically. That raised the specter of extreme overboughtness, which eventually slays uplegs.

Absolute price levels usually don’t matter much in the markets, as traders soon come to accept whatever prevailing prices happen to be. This past Monday GDX hit an upleg-to-date closing high of $40.87. That is much higher than late January’s low but much-lower than this ETF’s bull-to-date peak of $44.48 in early-August 2020. , so what really matters is how fast they move to current levels.

The major gold stocks powering 41% higher over a half-year are very different from them, skyrocketing that same 41% in a week. The former gains are gradual and sustainable, averaging out to modest 0.3% daily advances.

Yet the latter requires huge consecutive 8.2% up days, which are super-unlikely and certainly not a buying pace that can be kept up.

Overboughtness threatens uplegs when prices . That generates too much greed too soon, attracting too many traders to chase the exciting upside momentum. Their rush pulls forward too much of their potential near-future buying, leaving their capital firepower exhausted. Then sellers soon overpower those depleted buyers, prematurely killing uplegs well before fully mature.

There are many technical tools to measure overboughtness and opposing oversoldness after selloffs. My favorite is one I developed decades ago called Relativity. It simply looks at prevailing prices as . 200dmas are ideal baselines from which to measure the speed and size of price moves. While they are slow to change, they do still gradually trail prices over time.

Relativity Trading simply divides daily closing prices by their underlying 200dmas, then charts the resulting multiples over time. These are perfectly-comparable percentages regardless of prevailing price levels. And they tend to in trending markets, which are ideal for actively gaming bull uplegs and corrections.

This chart superimposes GDX technicals over its Relative GDX overboughtness-oversoldness indicator, or rGDX, over the past couple of years or so.

Rendered in red, this effectively flattens GDX’s 200dma to horizontal at 1.00x. This leading sector ETF’s price action meanders around that baseline in comparable terms. While gold stocks may be short-term overbought, they are nowhere near upleg-threatening extremes.

GDX’s impressive surge higher since late January is readily-evident in this chart. It included a powerful upside breakout from a major technical formation, a sizable pennant crossed with a descending triangle. That was followed by a more-important 200dma upside breakout, which both happened before Russia invaded Ukraine, catapulting gold prices sharply higher.

Such a big-and-fast surge left technically-oriented traders increasingly worrying about overboughtness in this sector. The quicker and higher gold stocks rally, the greater the risk of becoming unsustainably-overbought. Lesser overboughtness can trigger mid-upleg pullbacks, while greater overboughtness kills uplegs ushering in deeper and longer corrections. So monitoring overboughtness is essential when riding uplegs.

Heading into that long Easter weekend, as GDX rallied to new upleg highs, the . In other words, GDX closed 23.3% above its trailing 200-day moving average. Also, well over its shorter-term 50dma, this leading gold-stock benchmark was definitely overbought. But was it overbought-enough to threaten to prematurely truncate gold stocks’ latest upleg?

Nowhere close according to bull-to-date precedent.

I started looking at price levels relative to their 200dmas way back in 2004, and have spent long years since both backtesting Relatively and actively trading on it. The latest five calendar years proved to be a good general timespan over which to define Relatively trading ranges. These are based on for relative multiples’ lower-support and upper-resistance levels. GDX’s current range is shown above.

Those are extremely-oversold levels seen after major corrections that are really likely to birth new bull-market uplegs. Both GDX’s current young upleg and its previous couple launched after the rGDX plunged under or neared that strong-buy zone. In late September, GDX fell to 0.838x before the preceding correction gave up its ghost ushering in today’s upleg.

On the overbought end of this spectrum, rGDX trading-range resistance is up near 1.35x its 200dma. These are revealing high odds bull-market uplegs are topping before rolling over into subsequent corrections. Once GDX stretches more than 35% above its 200dma, traders need to be wary of uplegs failing. That doesn’t mean selling outright, just ratcheting up trailing-stop-loss percentages.

When mature uplegs are really surging and fueling popular excitement, they can coast longer and higher on self-feeding upside momentum. The faster gold stocks rally, the more traders want to chase their big gains. As exact upleg toppings aren’t knowable in real-time, realizing gold-stock gains risks missing out. It is more prudent to tighten up trailing stops while protecting more gains.

Even 1.35x is actually on the lower side historically for major gold-stock upleg toppings. For years GDX’s relative-trading-range upper resistance .

It was just dragged down to 1.35x in the most-recent trading-range update late last year, thanks to one of the most-extreme market anomalies witnessed in our lifetimes. That was March 2020’s pandemic-lockdown stock panic, which is seen in this chart.

Leading into that, GDX had powered 76.7% higher over 17.5 months in a major upleg. That gradual ascent rate was very sustainable, so the rGDX was only running 1.153x when gold stocks reached their last interim high before COVID-19 lockdowns slammed global markets. GDX had stretched higher above its 200dma within that upleg, but never enough to threaten its demise. Then gold stocks were sucked into that panic.

They plummeted as gold was battered lower on epic gold-futures selling in response to huge safe-haven dollar buying. We aggressively bought the resulting radically-oversold gold-stock lows, which I argued at the time were an unsustainable anomaly. Indeed GDX rocketed higher into a massive 134.1% upleg over just 4.8 months, which crested at a 1.448x rGDX multiple in early August 2020. That was a more-normal peak.

The subsequent gold-stock upleg into mid-May 2021 was also killed way early by another unique event. That was when the Federal Reserve started its from zero interest rates and epic quantitative-easing money printing to both rate hikes and quantitative tightening looming. So that gold-stock upleg failed super-early, at just 28.4% GDX gains over 2.5 months and a mere 1.074x rGDX.

With the world finally learning to live with COVID-19, it certainly won’t spawn another lockdown-driven stock panic. And with the Fed’s newest rate-hike cycle already underway and set to accelerate as QT follows hot on its heels, the next market-shaking hawkish Fed pivot is many years away. So gold and its miners’ stocks are likely to less distorted by anomalous events.

Even including that pair of prematurely-killed squib uplegs, all five GDX has completed so far during this secular gold bull have still averaged So today’s sixth, just hitting +41.4% at best, remains small compared to bull-to-date precedent. It should continue powering higher on balance for months to come. The gold stocks’ sentiment, technicals, and fundamentals remain exceedingly bullish.

Upside momentum needs to accelerate dramatically before that can happen. A major technical buy signal and strong seasonality ought to hasten that.

GDX flashed a fabled in mid-March, as its shorter 50dma climbed back above its longer 200dma! These powerful buy signals happen early in major uplegs, with the last decisive Golden Cross triggering early in mid-2020’s huge 134.1% GDX surge.

And May is actually the strongest month of the year seasonally for gold stocks, with an older index averaging big 4.9% gains in modern gold-bull years.

Gold stocks are ultimately leveraged plays on gold, which and thus stock prices. The major gold miners of GDX have earned fat profits for seven quarters in a row before this latest Q1’22, which will be reported over the next several weeks. With this newest quarter’s average gold price surging another 4.6% higher than the preceding Q4’21’s, the gold miners’ Q1 results should prove great.

Higher earnings will force their generally-already-low valuations even lower, leaving their fundamentals looking even more bullish. Those will continue improving as gold prices keep marching higher on balance, driven by the raging inflation unleashed by extreme Fed money printing and stock markets likely rolling over into a bear market on Fed tightening. Last week’s gold-upleg-strengthening essay analyzed both.

So this current gold-stock upleg is well-positioned to keep powering higher on balance in the coming months. While it will flow and ebb like usual, surging higher before pulling back, it hasn’t yet grown large enough or gotten overbought enough to threaten giving up its ghost. Sentiment, technicals, and fundamentals are still giving all-clear-ahead signals.

Thus any weakness can be used as buying opportunity to add positions.

The bottom line is gold stocks are still running higher, their sixth upleg of this secular gold bull remaining underway. Despite its strong rally in recent months, the leading GDX gold-stock benchmark hasn’t yet hit upleg-threatening levels of overboughtness.

Until that happens, there’s no need to worry about this young upleg failing. Both gold stocks’ technicals and fundamentals are strong and still improving, with gold itself continuing to power higher on balance. This underlying gold bull fueling gold stocks’ gains should head much higher on the Fed’s raging inflation and weaker stock markets hit by aggressive Fed tightening. This is a super-bullish backdrop for gold stocks. 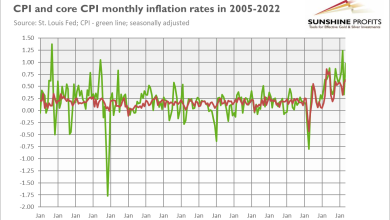 Why Did Gold Fall Despite Accelerating Inflation? 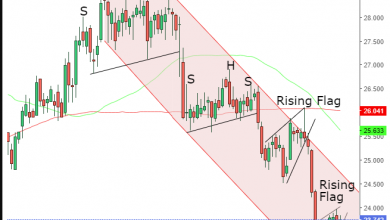 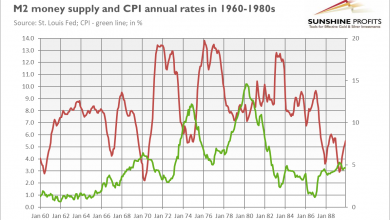 If Post-1971 Monetary System Is Bad, Why Isn’t Gold Higher? 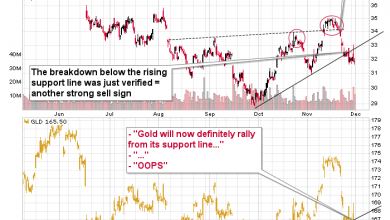 Don’t Get Yourself Into A Bull Trap With Gold