Both the headline and core US CPIs continued to accelerate in March, allowing market participants to maintain bets over an aggressive rate path by the Fed in the months to come. That allowed the US dollar to stay in the driver’s seat against most of the other major currencies and pushed equities slightly lower.

Overnight, the RBNZ hiked rates by 50 bps but maintained its projections for the overall rate path, which could be characterized as a “dovish double hike.” Today, the central bank torch will be passed to the BoC, which is expected to hike by 50 bps.

RBNZ Hikes by 50 bps, but NZD Slides, Spotlight Turns to the BoC

The US dollar continued trading higher against all but two of the other major currencies on Tuesday and during the Asian session Wednesday. It gained the most versus EUR, JPY, and CHF, while it underperformed only against AUD and CAD. 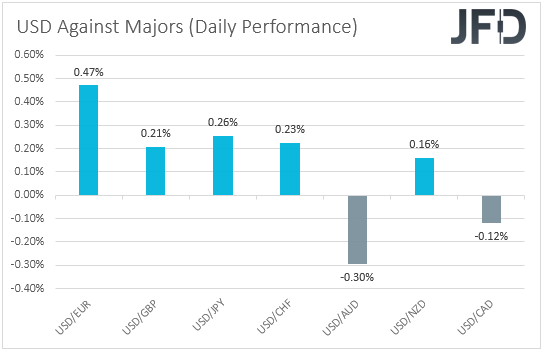 So, with that in mind, we prefer to turn our gaze to the equity world to get a clearer picture of the broader market sentiment. There, we see that major EU and US indices traded slightly in the red, but today, during the Asian session, the morale improved, with both Japan’s Nikkei and South Korea’s KOSPI jumping nearly 2% each. 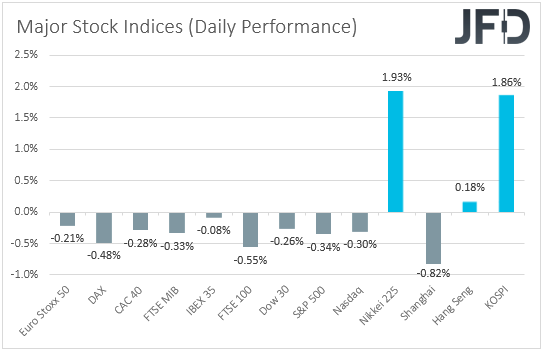 The darkening prospect for peace in Ukraine and expectations over a very aggressive tightening path by the Fed may be why most equities continue to lose ground. Yesterday, we got the US CPIs, with both the headline and core metrics accelerating further.

However, although the headline rate exceeded its forecast, the core one came somewhat shy of its projection. That’s maybe why equities did not tumble much. The outcome helped the US dollar stay in the driver’s seat, at least against the majority of its other major peers.

As far as market expectations over the Fed’s future course of action are concerned, the data did not change the picture, in line with the not-that-large slide in equities. According to the CME FedWatch Tool, a 50 bps hike at the next FOMC gathering has risen slightly, to 85.4% from 84.3%, but the chance for a triple hike in June has now fallen to 17.9% from 35.5%. Investors are more convinced that another double hike will be enough in June.

As for our view, as long as data and Fed comments favor an aggressive tightening, faster than any other major central bank, the US dollar is likely to stay on the front foot. As for the equities, with the war in Ukraine still raging and hopes of an imminent resolution vanishing, expectations of aggressive rate hikes around the globe are likely to keep them under pressure.

Speaking about aggressive rate hikes, overnight, the RBNZ lifted its OCR by 50 bps, more than the 25 bps consensus, surprising even us. The New Zealand dollar instantly spiked higher, but it quickly gave back those gains and traded even lower. 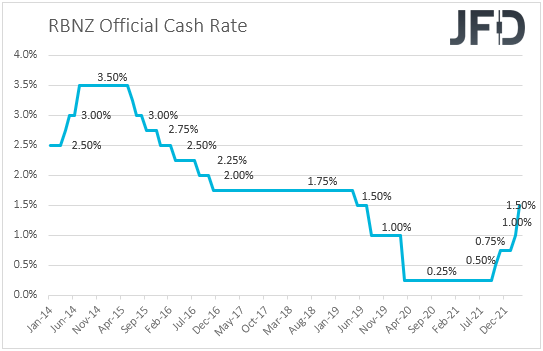 In our view, this was because the RBNZ said that it remained comfortable with the outlook for the OCR as outlined in February and that the larger move was intended to provide more policy flexibility. In other words, they hiked by more now, but they could slow down later, as they maintained their later rate-path projections.

That’s not a more aggressive stance than in February. They just moved sooner, so they can hold on whenever they judge appropriate in the future. With that in mind, we would expect the Kiwi to now underperform for a while against currencies of the central banks which reveals a willingness to normalize faster than previously thought.

Today, the central bank torch will be passed to the BoC. At their March gathering, officials of this Bank hiked rates by 25 bps to 0.50%, adding that growth for the first quarter of 2022 seemed more solid than previously projected. 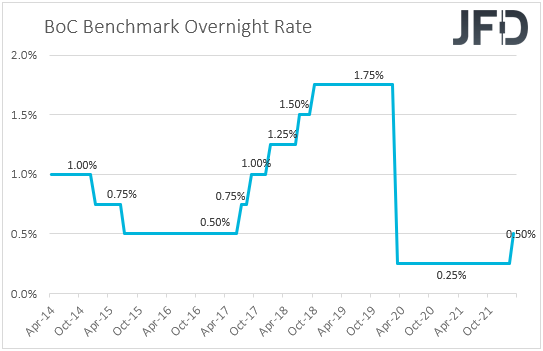 Indeed, data since then have proved them right, with the Ivey PMI surging to 74.2 in March. and the unemployment rate sliding from 5.5% to 5.3% in February and staying there in March. Inflation kept accelerating, which enhances the view for more rate hikes by this Bank in the months to come.

The consensus is for the BoC also to deliver a double hike today, and this time we agree. A 50 bps increase by itself is unlikely to provide a major boost to the Loonie, as this appears to be already priced in.

Officials will have to maintain an optimistic language, hinting that more such increases may be on the way. If we only get a 25 bps liftoff, investors will probably be disappointed and perhaps push the Loonie lower.

GBP/NZD traded higher overnight after it hit support at 1.8850. Overall, the pair continues to trade above the downside line drawn from the high of Mar. 15 and above the upside line taken from the low of Apr. 5.

This paints a cautiously optimistic picture to get more confident regarding the upside. We would like to see a clear break above the key resistance of 1.9115, marked by the highs of Mar. 29 and Apr. 12.

Such a break could wake up more bulls, who could decide to push the action towards the 1.9295 or 1.9365 barriers, marked by the highs of March 17th and 15th, respectively. If they are not willing to stop there either, a break higher could extend the advance towards the inside swing low of Mar. 2, at 1.9620.

CAD/JPY has been trading in a sideways manner this week, oscillating between the 99.00 and 99.85 barriers. However, the broader path remains to the upside in the bigger picture since Mar. 8. Although it has slowed down lately, it is still respecting an upside support line drawn from the low of Mar. 23. Thus, we see the case for some more advances in the near term.

To get more confident on that, though, we would like to see a clear break above the high of Mar. 28, at 100.20, which would take the rate into territories last tested in 2015. The next stop may be at around 101.05, which provided strong resistance between Jun. 5 and 24. If the bulls are willing to continue climbing higher, we may see them hitting the 102.25 territory, marked by the inside swing low of Dec. 30, 2014.

We will examine whether the bears have stolen the bulls’ swords upon a break below the 98.15 barrier, marked by the low of Apr. 7. This could confirm the break below the aforementioned short-term upside line and may initially allow declines towards the 97.05 territory, marked by the low of Mar. 31. If the bears do not find any difficulty overcoming that hurdle, then its break may set the stage for larger declines, perhaps towards the low of Mar. 23, at 95.70.

As for Today’s Events

During the early European session, we already got the UK CPIs for March, with both the headline and core rates rising by more than expected, allowing GBP traders to maintain their bets over fast rate hikes by the BoE as well.

Later in the day, besides the BoC decision, the only other release worth mentioning is Eurozone’s industrial production for February, with the forecast pointing to a steep slowdown from January.

As for tonight, during the Asian session Thursday, we get Australia’s employment report for March. The unemployment rate is forecast to have ticked down to +3.9% from 4.0%, while the net change in employment is forecast to show that the economy has gained 40.0k jobs after adding 77.4k in February. 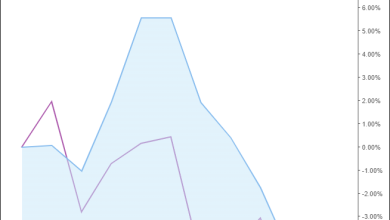 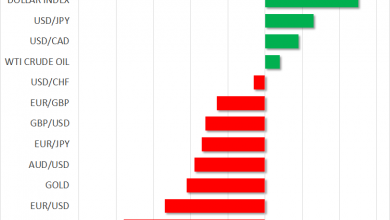 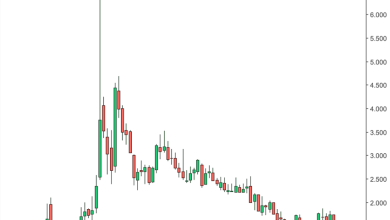 As Cannabis Stocks Continue To Tank, Look At Sales Growth For Turnaround Sign 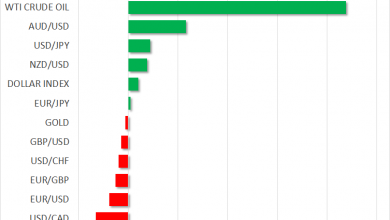