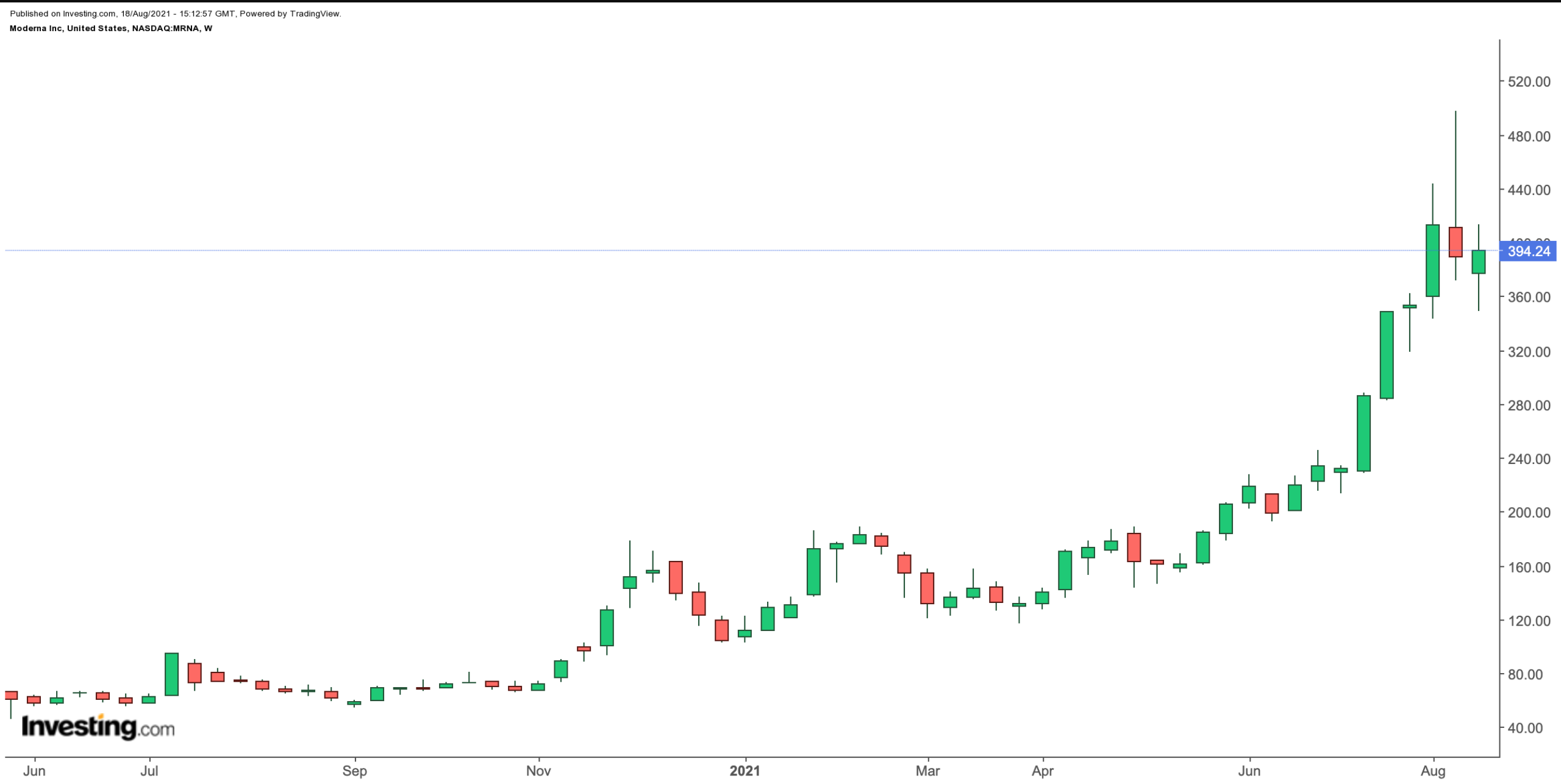 Net income for the quarter was $2.8 billion, translating into diluted EPS of $6.46. A year ago, the group had reported a net loss of $117 million.

“We now have mRNA candidates in clinical trials across five therapeutic areas, including infectious diseases, cardiovascular, oncology, rare disease and auto-immune disorders. We are pleased that our COVID-19 vaccine is showing durable efficacy of 93% through six months, but recognize that the Delta variant is a significant new threat, so we must remain vigilant.”

Although the Cambridge, Massachusetts-based biotech is working on other vaccine candidates, analysts expect revenues to drop, especially after 2022. The company’s current market capitalization of about $158 billion might mean most of the potential gain from the COVID-19 vaccine has already been realized.

What To Expect From MRNA Stock Price

Among 17 analysts polled via , MRNA stock has a neutral rating. 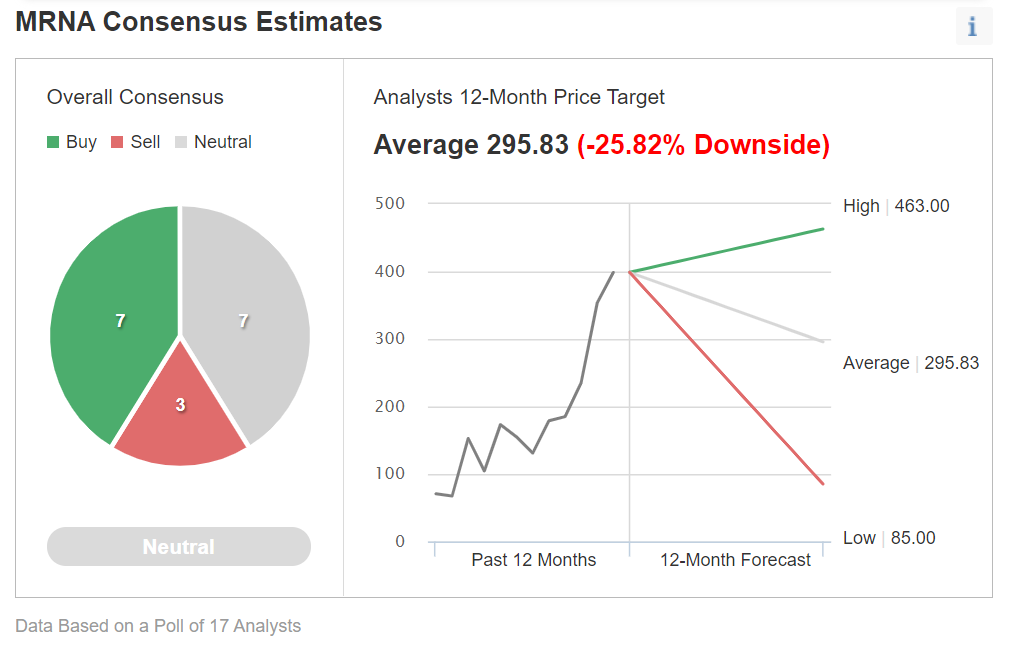 However, the 12-month median price target of $295.83 would represent a decline of close to 25% from the current level. In other words, overall, Wall Street is bearish on Moderna shares.

According to short technical charts, we could see an up move in MRNA stock, at least in the near-term.

However, more than likely Moderna stock will trade sideways within a wide band in the coming weeks—potentially between $350 and $400—until either the bulls or the bears get the upper hand.

When we look at longer-term charts and trend lines, the picture is mixed, and a potential decline toward $300 seems possible, before a new bull leg begins.

As part of the short-term sentiment analysis, it would be important to look at the implied volatility (IV) levels for Moderna options, which typically show traders the market’s opinion of potential moves in a security. However, this metric does not forecast the direction of the move.

We are also in the bearish camp and expect a further decline toward $350, or even below, during the rest of the year. Therefore, it could still be too soon to buy into the shares.

However, different portfolios have different objectives and risk/return profiles. For instance, some investors might believe the Delta variant as well as the threat of other potential variants of COVID-19 could provide further tailwinds for MRNA shares. Therefore, they might regard the recent decline in price as an opportunity to buy into the Moderna share price.

Investors who are not concerned with daily moves in price and who believe in the long-term potential of the company could consider investing in Moderna stock now.

Such buy-and-hold investors should expect to hold this long position for several months—or most possibly longer—while the stock potentially makes an attempt at the record high of $497.49.

Assuming an investor enters this trade at the current price and exits around $495, the return would be about 25%.

However, investors who are concerned about large declines might also consider placing a stop-loss at about 3-5% below their entry point.

Readers who are bearish on Moderna stock and expect a further short-term drop, might consider initiating a bear put spread strategy.

Such a bear put spread would be established for a net debit (or net cost). It will profit if MRNA declines in price.

For instance, the trader might buy an out-of-the-money (OTM) put option, like the MRNA Oct.15 380-strike put option.

This option is currently offered at $37.40. Thus, it would cost the trader $3,740 to own this put option, which expires in slightly less than two months.

At the same time, the trader would sell another put option with a lower strike, such as the MRNA Oct.15 360-strike put option. This option is currently offered at $28.15. Thus, the trader would receive $2,815 to sell this put option, which also expires in slightly less than two months.

This maximum loss of $925 could be realized if the position is held to expiry and both MRNA puts expire worthless. Both puts will expire worthless if the MRNA share price at expiration is above the strike price of the long put (higher strike), which is $380 at this point.

This trade would break even at $370.75 on the day of the expiry (excluding brokerage commissions).

3. Buy An ETF That Has Moderna As A Top Holding

Many readers are familiar with the fact that we regularly cover exchange-traded funds (ETFs) that could be suitable for buy-and-hold investors. Thus, readers who do not want to commit capital to MRNA stock but would still like to have sizeable exposure to the shares, could consider buying a fund that holds the company as a leading name.

Examples of these ETFs include:

Moderna has become one of the most important vaccine stocks of the past year. Despite the gains in MRNA shares since the early weeks of the pandemic in 2020, analysts now debate whether Moderna’s valuation level is well beyond what the growth prospect warrants in the future. Therefore, there could be further volatility in the MRNA share price. 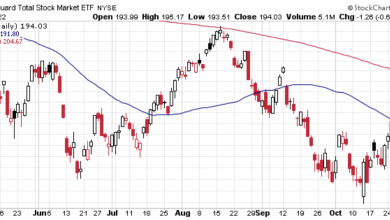 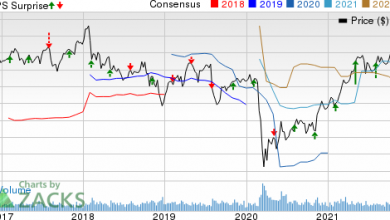 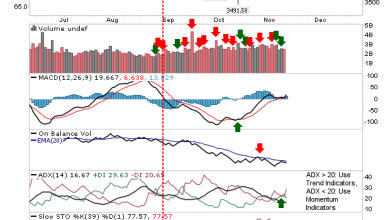 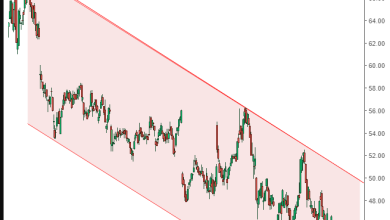 Chart Of The Day: Beaten-Down Intel Shares Still Have A Long Runway Lower