Just a few months ago, few would have expected natural gas to leave crude oil and gasoline in the dust as it races to the top of the table for energy returns.

Yet, with just six weeks left to the summer, natty, as gas is popularly known in the trade, doesn’t seem to be giving up. As of Tuesday’s close, it was up almost 65% year-to-date, edging US crude’s 40% and gasoline’s 60% returns on the year. 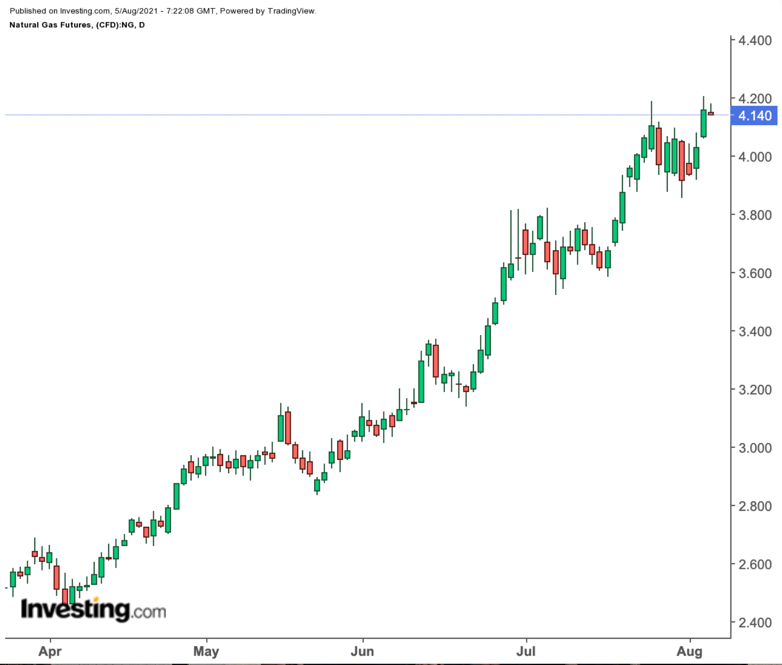 Analysts think natty will be up 75% or maybe more by the time August closes from demand for cooling generated by some of the most extraordinary heat seen in a summer.

While some consolidation at least is expected in the fall period, beginning Sept. 22 when the weather will be benign for a while, the late October-December period could lead to a renewed run-up in gas demand from typically chilly temperatures that generate the need for heating.

Like in the summer, the cold season’s impact on natty could be phenomenal this year due to a single reason: worrying low levels of gas in storage.

While gas injections into storage have largely been within analysts’ expectations over the past eight weeks, the few occasions when they missed forecasts have produced shockingly low numbers. Two particular weeks stand out: the week ending June 15, where the injection was just 16 bcf, or billion cubic feet, versus forecasts for 72; and the week ending July 6, when the build was 16 bcf versus the expected 34.

As market participants await the US Energy Information Administration’s latest weekly update on natural gas storage at 10:30 AM ET (14:30 GMT) today, analysts tracked by are bracing for another stunningly low injection of 21 bcf on the average for the week ending July 30 versus the previous week’s build of 36 bcf.

If true, then gas in holding would only be around 2.735 tcf, or trillion cubic feet, some 6.1% below the five-year average and 16.3% below the same week a year ago.

As it stands, a 21 bcf build will be even lower than the 32 bcf injection seen during the same week a year ago and a five-year (2016-2020) average build of 30 bcf, according to market data provider Refinitiv. 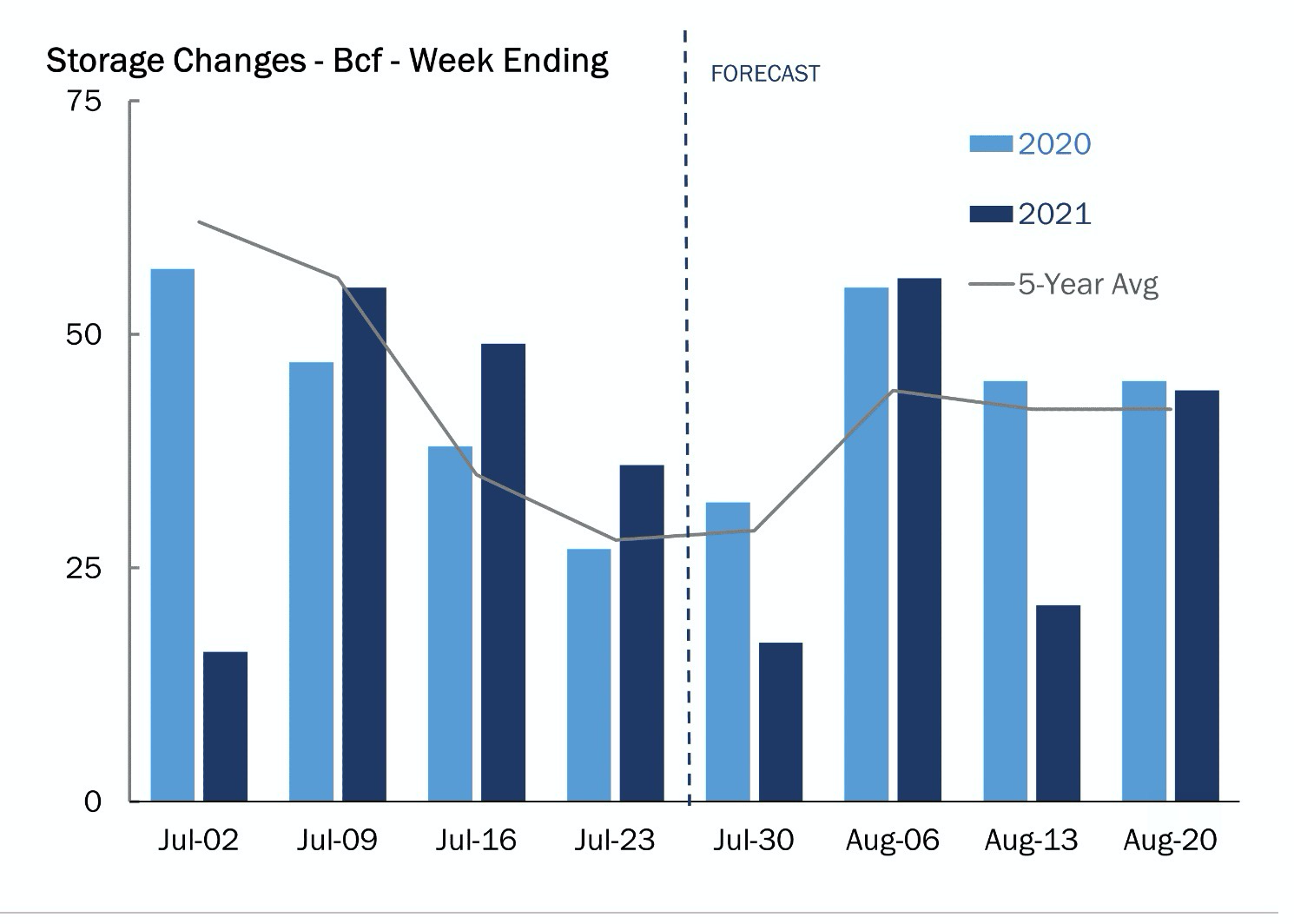 But some analysts are predicting even lower numbers for the July 30 week.

Dan Myers of Houston-based gas markets risk consultancy Gelber & Associates is one of them, projecting an injection just in the teens. In a note to the firm’s clients, shared with , he said:

“G&A expects that the injection for the week ending in July 30th will be 17 bcf.”

“As of now, weather forecasts anticipate that the week ending in August 13th will also witness significant heat – enough to rival CDD totals for the week of July 30. Increased weather-driven demand will, in the short term, lead to lower than average injections and pull total storage further away from the 5 year total storage inventory average.”

CDDs, which are used to estimate demand to cool homes and businesses, measure the number of degrees a day’s average temperature is above 65 degrees Fahrenheit (18 degrees Celsius).

Last week’s temperatures were warmer-than-usual, with 101 CDDs compared to a 30-year average of 90 CDDs.

‘Hottest Temperatures Of The Year’

The unyielding summer heat and the widening seasonal deficit of gas-in-storage will likely push prices of the fuel even higher.

Myers noted that as of Tuesday’s close, the front-month September gas contract on the New York Mercantile Exchange had zoomed past the previous high of $4.18 per mmBtu, or million metric British thermal units, set on July 26 to reach a new peak of $4.205.

“Given that the hottest temperatures (observed thus far) of the year are aligned with this week’s incoming storage report, the market may be reacting prematurely to expectations for a low injection report,” he said, referring to the storage update due at 10:30 AM ET today. “Further low storage injections run the risk of driving prices higher, and it is quickly looking like $4.50 may be within reach of the market,” Myers added.

The last time gas prices traded that high was during the run-up to Christmas 2018, when they peaked at $4.66 per mmBtu during the week ending Dec. 7 that year.

Still, some, like Scott Shelton, energy futures broker at ICAP in Durham, North Carolina, urged longs in gas to be cautious of a market that had risen for five straight months.

“Overall, I have  the same view, which is stronger but still a bit afraid of the positioning, which is quite long.”

Shelton said his concern was more about the trend typical in markets that had mostly gone one-way over an extended period. “We get them ALL OF THE TIME in other markets for silly reasons and the positioning makes me worried that one could come in NG,” he wrote.

The potential for intense heat next week already has cut short an emerging period of consolidation in the gas market, EBW Analytics Group said in a post on industry portal natgasintel.com.

A growing cooling demand outlook for the coming 15-day period could lift weekly CCD forecasts for the week ending Aug. 12 to 93, which is 25 CDDs hotter than this week, they said.

Next week’s outlook suggested the “hottest week of the summer,” said Bespoke. It pointed to widespread temperatures in the 90 Fahrenheits across the Midwest and East underneath a strong upper level ridge in the six- to 10-day period. A couple of days next week are forecast to reach record highs in heat.

“Heat does come off somewhat as we reach the end of next week, but remains generally at or just above the five-year average.”

Stronger winds also are still in the cards for early next week, but they may drop off by late week, according to the forecaster. Tropical activity remains “very quiet for now, but that lull should not last too much longer,” it said.

NatGasWeather, meanwhile, noted that “cooler trends or bearish news gets little to no reaction from the natural gas market, while hotter trends/bullish news pushes prices higher.” 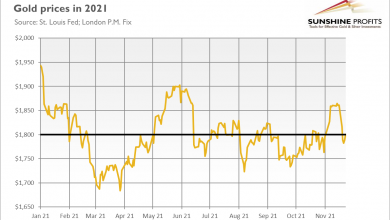 As Fed Worries About Inflation Should We Worry About Gold? 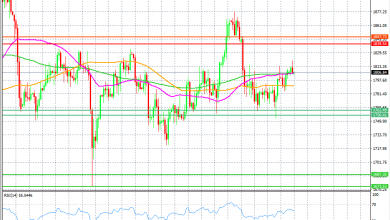 What’s Behind The Gold Rally 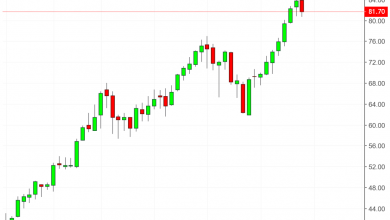 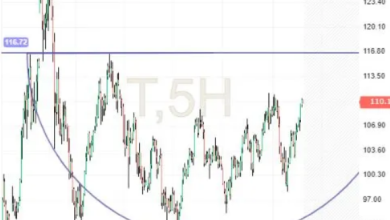 Crude Oil And The Rounding Bottom