Everyone loves to dunk on the Federal Reserve (Fed). To many, the setters of U.S. monetary policy never get it right. Its stable of Ph.D. economists are always too late, or too slow, or too early, or too fast. Shockingly, many have built prominent careers in peddling this viewpoint. Yet, few realize that the Fed’s errors stem from a poorly constructed view of money that is widely shared, even by its critics. This perspective leads to absurd conclusions like the Fed must destroy demand in order to combat today’s rising prices. Wait, what?!

You heard that right. In fact, you might even be nodding in agreement. The Fed wants to harm the economy to combat today’s rising prices. Its solution for pain is more pain. It’s for our own good, of course.

Well, so, as I mentioned, you can see places where the demand is substantially in excess of supply. And what you’re seeing as a result of that is prices going up and at unsustainable levels, levels that are not consistent with 2 percent inflation. And so what our tools do is that as we raise interest rates, demand moderates: it moves down. … I mean, so, yes, there may be some pain associated with getting back to that.

This flawed (and morally repugnant) line of thinking unfortunately dominates macroeconomic discussions today. How: 1) adjusting a single interest rate solely available to commercial banks on a monthly basis predictably impacts the entire country’s economic activity, and; 2) it’s morally proper for the Fed to destroy (certain) people’s lives, is so readily accepted is problematic. Identifying the dangers of such conclusions requires a different view of money; one that illuminates the constructive solution.

Why the Fed was created vs. what it does now

Ever since 1977, the Fed has pursued its so-called Dual Mandate to “maintain long run growth of the monetary and credit aggregates commensurate with the economy’s long run potential to increase production, so as to promote effectively the goals of maximum employment, stable prices and moderate long-term interest rates” (the third mandate is all but forgotten). This mouthful is popularly interpreted as promoting price stability and maximizing employment. The Fed pursues these goals by adjusting the Fed Funds Rate (FFR) and, more recently, by purchasing select securities in the open market (a.k.a. Quantitative Easing).

Yet, the Fed was established for a wholly different purpose. It was created in 1913 with the Federal Reserve Act to provide liquidity to commercial banks in times of stress via its “Discount Window” (it was also legally tasked to set reserve requirements for the newly created “Reserve Banks”). The U.S. experienced periodic bank panics and runs in the years preceding the Fed’s founding. The Fed was formed to help mitigate the currency demands causing these problems. The Fed’s Discount Window allowed private banks to obtain collateralized loans in order to meet these needs and stay afloat. That’s it; no mention of prices or employment.

More broadly, the Federal Reserve System was established to improve the flow of money and credit throughout the United States in an effort to ensure that banks had the resources to meet the needs of their customers in all parts of the country.

David C. Wheelock, Overview: The History of the Federal Reserve

When you’re a hammer, every problem’s a nail

Thus, the Fed’s current mandate is different from what it was designed to do. Providing currency to private banks is a wholly different objective than those stipulated by its Dual Mandate. While the Fed’s goals have changed, its tools, however, have not. It can only act in the same three ways—engage in open market operations (OMO), change the discount rate, and adjust reserve requirements. These were designed for the Fed’s original task, the Dual Mandate.

Today, the Fed acts in order to manipulate the FFR. The FFR is “the interest rate at which depository institutions lend balances at the Federal Reserve to other depository institutions overnight.” It’s what banks charge each other to borrow overnight funds used to satisfy their various regulatory capital requirements. Only Reserve Bank members have access to these funds.

So, what’s the FFR got to do with stable prices and maximizing employment? If you ask the Fed’s supporters (and critics), it’s complicated. If you ask me, it depends on how you define money. The Fed assumes that changes to the FFR result in a “chain of events” on “a range of economic variables” such that prices for consumer goods and services are impacted. While this view is orthodoxy today, I see it as a rationalization. Congress had a problem to solve and there was the Fed.

Changes in the federal funds rate trigger a chain of events that affect other short-term interest rates, foreign exchange rates, long-term interest rates, the amount of money and credit, and, ultimately, a range of economic variables, including employment, output, and prices of goods and services.

All About the Benjamins

Money and banking have been hotly debated for millennia. They are far from settled. Money currently has many and conflicting definitions. This is problematic because your view money dictates many others, such as whether the Fed can print it, if gold can hedge inflation, if Bitcoin can fix the financial system, and if banks create money from thin air. Thus, you can find credible intellectual support for nearly any economic policy you want, which was fortunate for the Congress.

The Employment Act of 1946 set the stage for the Fed’s Dual Mandate. World War II had just ended. Millions of returning soldiers were concerned about finding work in an economy that was transitioning from wartime to peacetime. With the Great Depression still top of mind, a fearful Congress passed the Employment Act of 1946 charging the federal government “to promote maximum employment, production, and purchasing power.” John Maynard Keynes’s demand-side economic theory supported these action. Thus, Keynesianism was institutionalized and began its reign. It was just a matter of time for the Dual Mandate.

The orthodoxy guiding policy in the post-WWII era was Keynesian stabilization policy, motivated in large part by the painful memory of the unprecedented high unemployment in the United States and around the world during the 1930s. The focal point of these policies was the management of aggregate spending (demand) by way of the spending and taxation policies of the fiscal authority and the monetary policies of the central bank. The idea that monetary policy can and should be used to manage aggregate spending and stabilize economic activity is still a generally accepted tenet that guides the policies of the Federal Reserve and other central banks today.

According to Keynes, changes to the money supply could change the price for consumer goods and services (given certain labor conditions). He defined money as a medium of exchange and store of value (in ). These two ideas form the bedrock for the Fed’s interest rate hikes today.

The Fed, evoking Keynes, believes that changing the FFR impacts the money supply and thus consumer prices. It expects rate hikes to reduce both. However, this application of Keynesianism is unsupported in practice. There’s no link between reserves on deposit with the Fed and consumer price changes. Yet, this theory remains gospel. 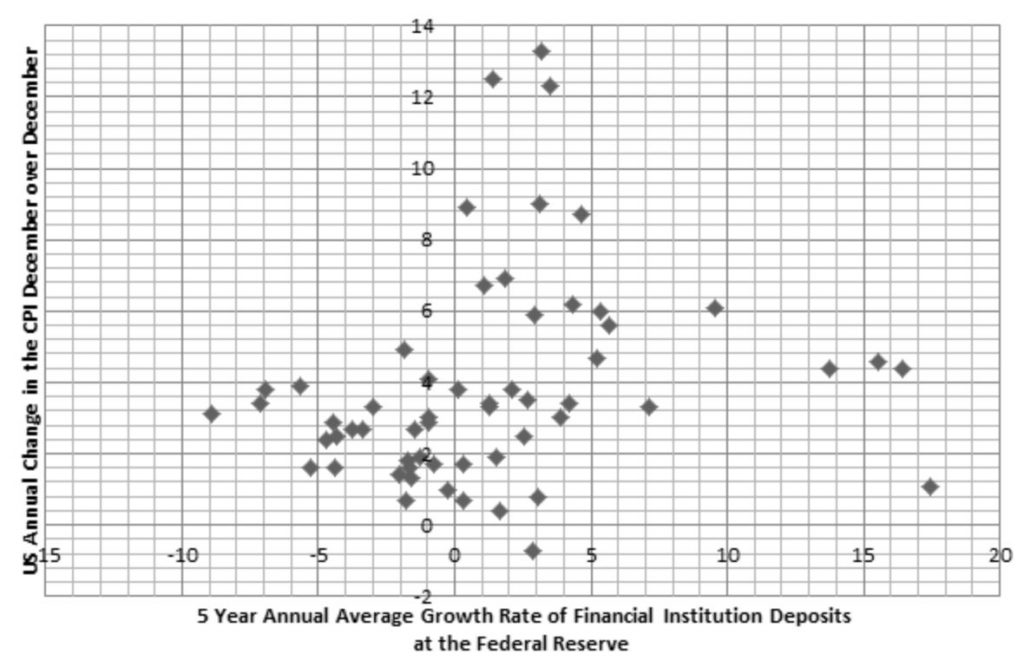 There’s no link between reserves on deposit with the Fed and consumer price changes.

Viewing money through the lens of a common measure of value exposes the danger of the Fed’s actions. Money merely accounts for existing economic value. Thus, it’s a stand-in for production. Whenever we produce something—a smartphone, computer code, shoes, or serve a meal to a customer—we record its existence in money terms.

Thus, the Fed doesn’t create money. It creates reserve deposits for member banks only. While banks help create money (through the application of leverage), it’s pure speculation from the liquidity provider’s perspective (i.e. the Fed). After all, banks might not lend their reserves; they might just buy securities instead. Thus, the “chain of events” linking FFR changes to consumer prices are assumptions. In my opinion, the FFR impacts the financial system in other ways.

For me, delinking money (production) from currency and savings illuminated the drivers of today’s rising prices. Shortages related to COVID lockdowns and the Russian invasion of Ukraine seem more impactful to prices than whatever leveraged wealth effect the Fed might have produced (the formers created supply chain disruptions and variability in available materials and labor). In fact, the Fed readily acknowledged this.

Well. So our tools don’t really work on supply shocks. Our tools work on demand. And to the extent we can’t affect, really, oil prices or other commodity prices or food prices and things like that, so we can’t affect those. … For both the situation in Ukraine and the situation in China, they’re likely to, both, add to headline inflation. And people are going to be suffering from that, you know. People almost suffer more from food and energy shocks then, but—even though they don’t actually tell us much about the future path. So the second thing is that they’re both capable of preventing further progress in supply chains healing or even making supply chains temporarily worse. So they’re going to weigh on the process of global supply chain healing, which is going to affect broader inflation, too. So, in a way, they’re two further negative shocks that have hit really in the last, you know, 60 days, 90 days.

Yet, the Fed’s acting in a completely unnecessary and dangerous way. By raising the FFR, it’s trying to demand and bring it more in line with the current level of output. The better solution is supply . We need more , not less demand. The focus should be on (re)building supply chains, increasing productive capacity and utilization rates, and reducing the risks to expand.

What’s the Fed to do? Nothing

What can the Fed do to help? Easy, it should do absolutely nothing; sit still and resist the urge (and prodding) to act. The Fed should neither raise nor lower the FFR. The FFR is a bank liquidity tool. It cannot—by the Fed’s admission—increase output.

Higher economic production stems from fiscal deregulation and monetary . Uncertainty harms it more than anything. Wavering monetary policy is another factor that already-stressed executives need to manage. It unnecessarily adds fuel to the fire. Stop making monetary policy adjustments. Let the private sector assess and price the cost of capital, allocate resources, and optimize output. Let it .

The best action in inaction

The Fed gets lots of grief. Yet, few criticize the assumptions that underpin its actions. Rather, most discuss superficial factors, such as the timing or magnitude of the Fed’s actions. While popular, they are not constructive. The Fed presumes that it must raise the FFR, destroy demand, and combat rising prices. While many support these actions, I see them as backwards and harmful.

The Fed’s acting in accordance with its Dual Mandate. However, its modern-day goals of price stability and maximizing employment were ascribed to the institution well after its founding. The Fed was created to reduce currency demands on commercial banks which produced runs and panics prior to its founding. The Fed’s tools were designed specifically for this task, not the Dual Mandate.

Today’s rising prices result from shortages created by global events. The prescription is to rebuild productive capacities impacted by such events, not to dismantle what already exists. Fiscal deregulation and monetary stability are needed to boost output. Thus, the Fed should do nothing. It should neither raise nor lower the FFR. It should resist the urge to act clearing the way for the private sector to solve the issues at hand. Maybe The Fed should read a good book instead. 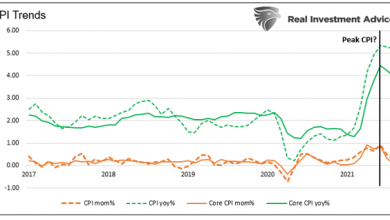 When Will ‘Transitory Inflation’ Overstay Its Welcome? 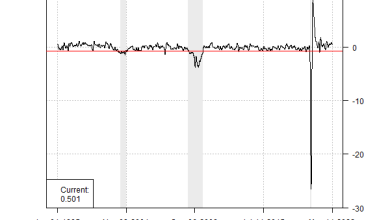 U.S. Recession Risk May Be Rising, But Growth Still Prevails 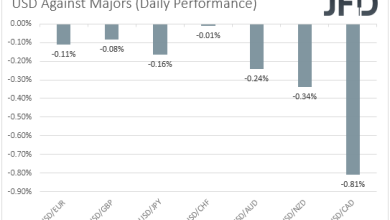 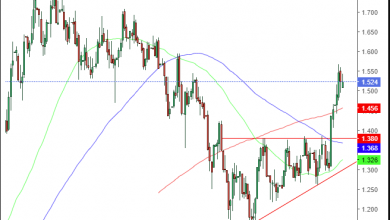