One could sense growing unease among traders and investors after September’s late month pullback, as worries escalated regarding what October might bring.

Indeed, there was much to be concerned about: rising inflation; accelerating interest rates; increasing global tensions and tense domestic politics. Stock markets at least needn’t have worried. Equity indices saw their best gains since 2015 during October. 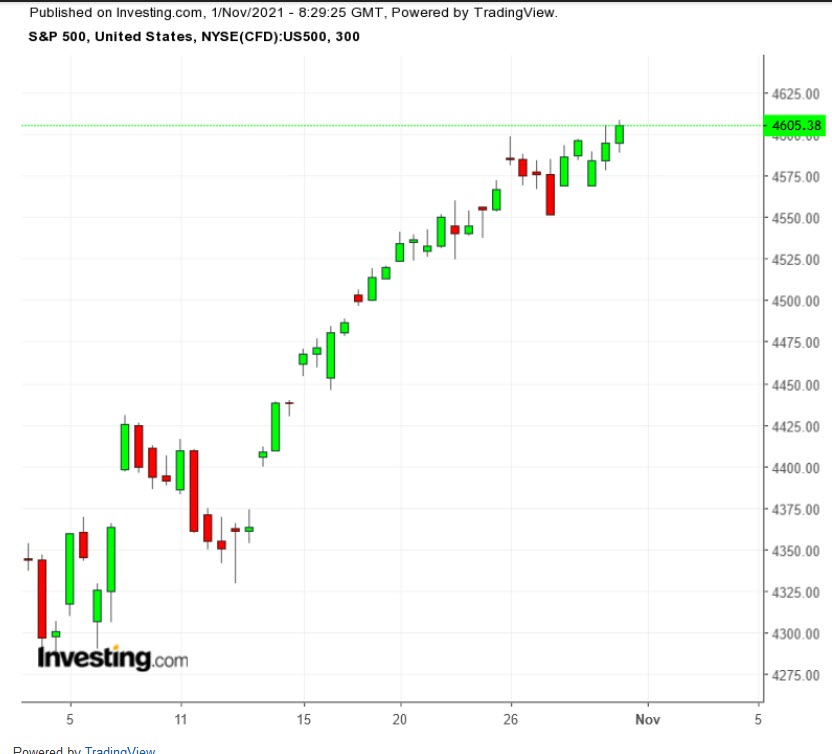 Thanks to a 17.6% gain for the month, Microsoft’s (NASDAQ:MSFT) market capitalization became the biggest among U.S. companies, surpassing that of Apple (NASDAQ:AAPL)—$2.49 trillion to $2.476 trillion. 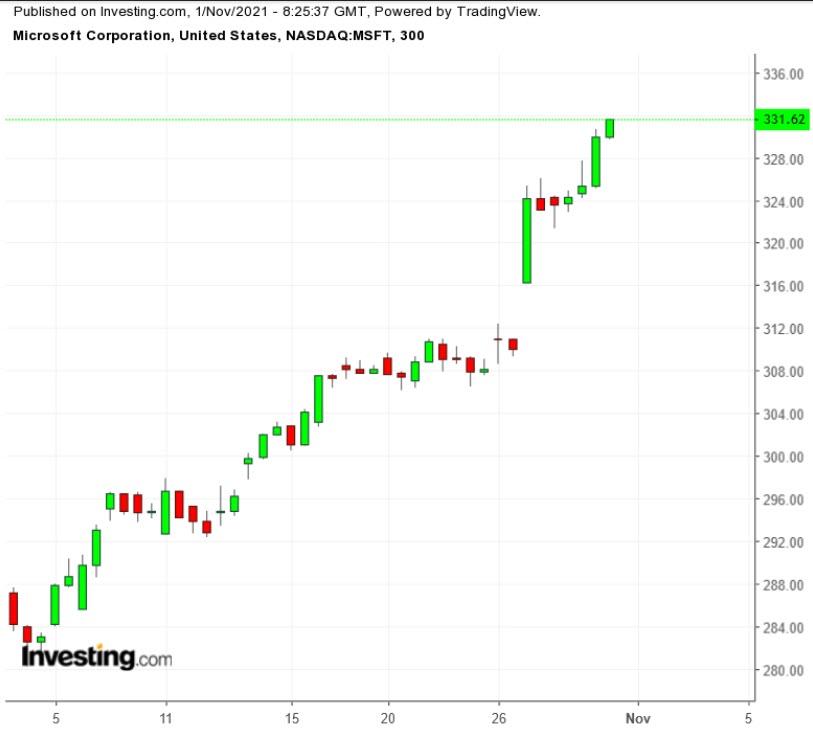 All this occurred irrespective of rising oil and gasoline prices that have been gaining steadily since early 2020, and the previously mentioned global supply-chain issues, rising inflation worldwide and a difficult political environment.

Plus, a stock pullback on the final Wednesday of October that seemed to have been triggered by investors nervous about risk, moving into longer-term bonds to lock in yield.

In short: Inflation? So what? That’s the attitude from investors, at least for now.

But price pressures are still there. Oil prices rose more than 10% in the month, with West Texas intermediate crude finishing at $83.57 a barrel. Crude is up 72% this year largely because the population seemed to work around the pandemic.

Gasoline prices, however, which traditionally fall in the autumn, are still rising. AAA’s Daily Fuel Gauge report showed the national average at $3.401 a gallon on Sunday, up 6.6% for the month and 51% for the year.

Energy stocks were among the market’s strongest sectors.

And Bitcoin continues to shine. The cryptocurrency was at $60,058 on Sunday, up 38% for the month and already starting to attract money into an array of new exchange-traded funds based on BTC futures trading.

Helping fuel the October surge has been investor interest in transformative technologies. 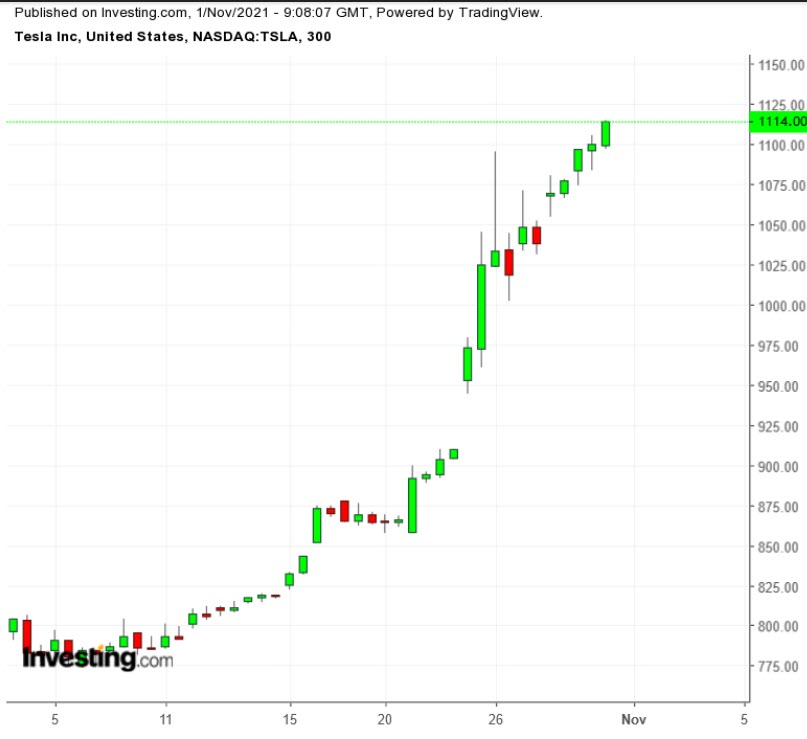 But three railroads were also among the top S&P 500 performers: Union Pacific (NYSE:UNP), Norfolk Southern (NYSE:NSC) and CSX (NASDAQ:CSX), all up better than 20% each. The stocks are benefitting from all the attention being paid to supply-chain crisis.

A big decliner among tech-related shares was Meta Platforms, the new name for Facebook (NASDAQ:FB). 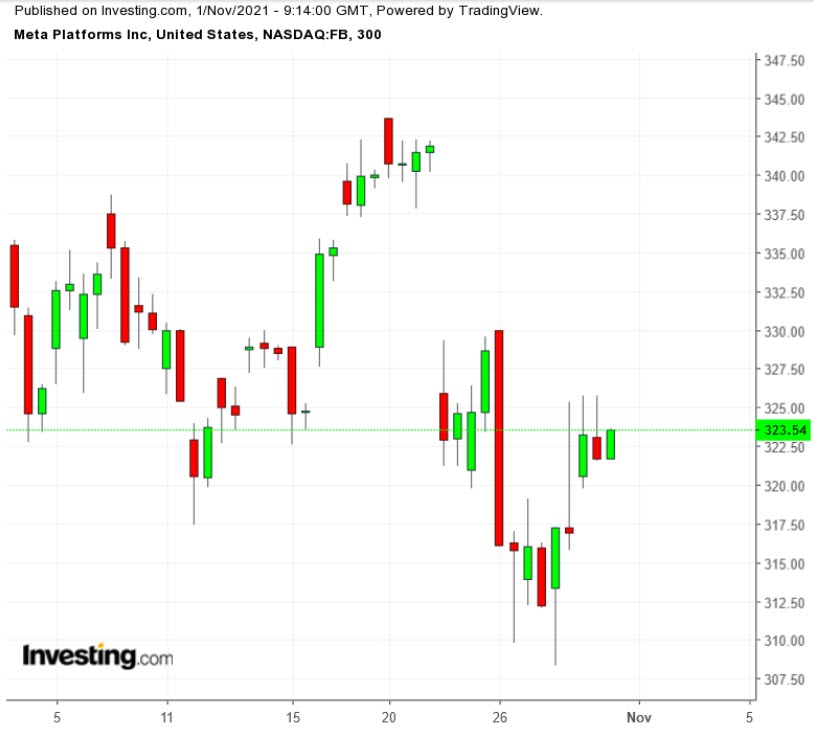 The new name is ostensibly meant to reflect CEO Mark Zuckerberg’s decision to invest in the Metaverse, which The Wall Street Journal defines as “an online virtual realm where people would work, play and shop.” Facebook will change its ticker to MVRS on Dec. 1.

A far larger problem for the company: the massive disclosures by a whistleblower of internal documents showing massively flawed oversight in many of its social-media platforms. FB shares peaked at $384.33 on Sept. 1 and are down 15.8% since. But they’re still up 18% on the year.

Health-insurance giant UnitedHealth Group (NYSE:UNH), Microsoft and pharma-giant Merck (NYSE:MRK) (also a COVID-19 vaccine supplier) were the top Dow stocks. Apple, up a respectable 5.89%, placed 12th for the month on the 30-component index.

But traditional tech giants IBM (NYSE:IBM) and Intel (NASDAQ:INTC) struggled during October, falling 9.95% and 8%, respectively. Aerospace giant Boeing (NYSE:BA) was off 5.9% on the month because of issues involving its 787 Dreamliner.

Despite a bullish month for stocks and bullish earnings so far, there are risks to consider.

Will the Fed surprise on Wednesday with a more hawkish turn on inflation? Not likely, but the inflation pressures that Fed Chairman Jerome Powell thought would be transitory have proved to be anything but. Worker shortages are considerable, and demands for more pay are at the heart of the problem.

Moreover, the fantastic appreciation of home prices in recent years is causing pressures. Plus, beating down the housing market carries huge risks.

Is growth slowing, particularly in the United States? Last Thursday’s gross domestic product report suggested it is. Third-quarter growth was 0.5%, the Commerce Department said, lower than expected and down from 1.6% in the second quarter.

Upcoming gubernatorial elections in Virginia and New Jersey may have a tremendous spillover effect on the 2022 election and beyond. The Democrats are barely hanging on to a slim majority and can’t seem to get their spending plans in place.

In addition, Axios and NBC News, as well as others, reported Sunday that President Joseph Biden’s polling numbers are weak, and Donald Trump is desperate to reclaim the White House.

Global tensions are rising, particularly with China and Taiwan. China wants Taiwan. Taiwan wants its ally the United States to defend it.

A parallel issue starting to play out—the global climate change meeting which began over the weekend. While everyone wants action on global warming, no one wants to give up anything to get it, to the rage and disappointment of climate activists. 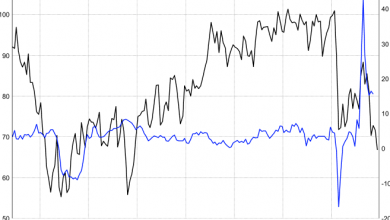 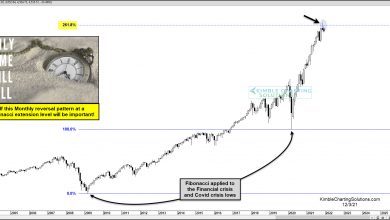 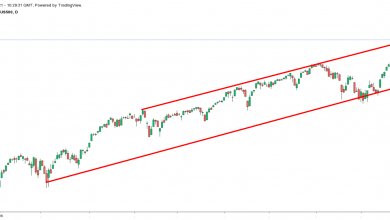 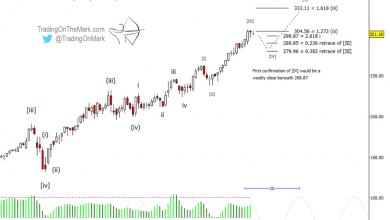 Microsoft Due For A Correction