Though US futures initially rebounded early Tuesday from Monday’s Wall Street selloff, at time of writing all four contracts on the major US indices—the S&P 500, Dow Jones, NASDAQ and Russell 2000—along with European stocks have headed lower. As well, during Tuesday’s Asia session, regional benchmarks finished in the red, ahead of an array of the last central bank decisions for 2021.

Expectations of a hawkish Fed, plus ongoing Omicron uncertainty are buffeting markets.

The dollar hit a one week high before reversing; Treasury yields crawled higher; Bitcoin as well as gold have reversed lower.

At the open, the Europe STOXX 600 Index gained with miners. However, Asian stocks fell on news of the spread of Omicron, with the MSCI’s broadest index of Asia-Pacific stocks excluding Japan dropping nearly 0.5%. 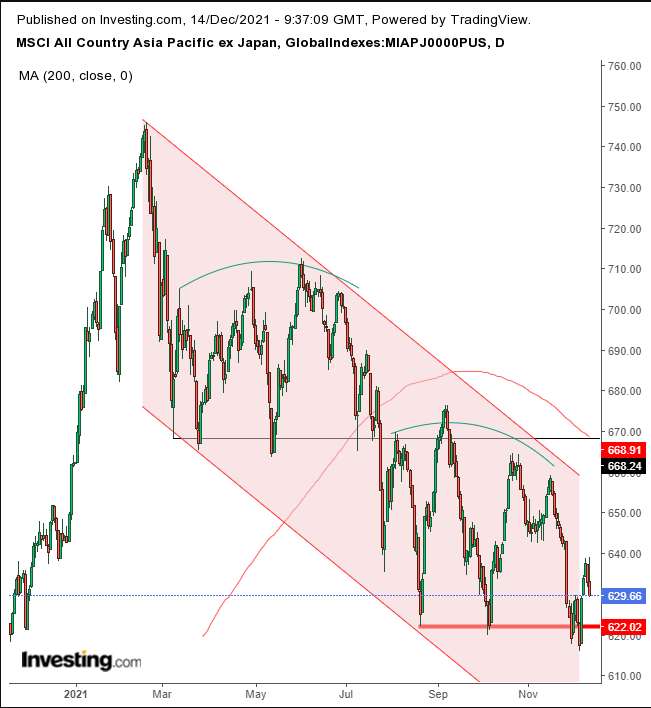 The broad Asian benchmark is heading toward completing a second consecutive continuation pattern within its falling channel.

The market narrative says traders are focused on central bank policy decisions, in response to the highest inflation in decades while also monitoring Omicron developments—clearly the two most influential financial market themes right now. If that assessment is correct, investors appear to have disregard the first UK reported Omicron-related death along with ten hospitalizations, most of whom were vaccinated, perhaps indicating the variant’s alarming contagion rate. It’s possible investors are ignoring the latest coronavirus risks on expectations that central banks will contain spiking inflation.

However, that could be tricky. Since central banks combat inflation via tightening, equity investors stand to be pressured by a double blow: equities could become more expensive as cash becomes more costly, pushing stock valuations instantly higher, both of which tend to trigger selloffs.

And that doesn’t even include the possibility companies will reduce buybacks and curtail expansion over the longer term.

Conversely, if policymakers don’t tighten, double-digit inflation, seen in the 70s, could be on the horizon. Indeed, Allianz Chief Economic Advisor Mohamed El-Erian has called the Fed’s “transitory” characterization of inflation as the “worst inflation call” in the central bank’s history.

During Monday’s New York session, all four gauges closed in the red, with the S&P 500 Index falling from a record and the NASDAQ 100 underperforming, down 1.5%. 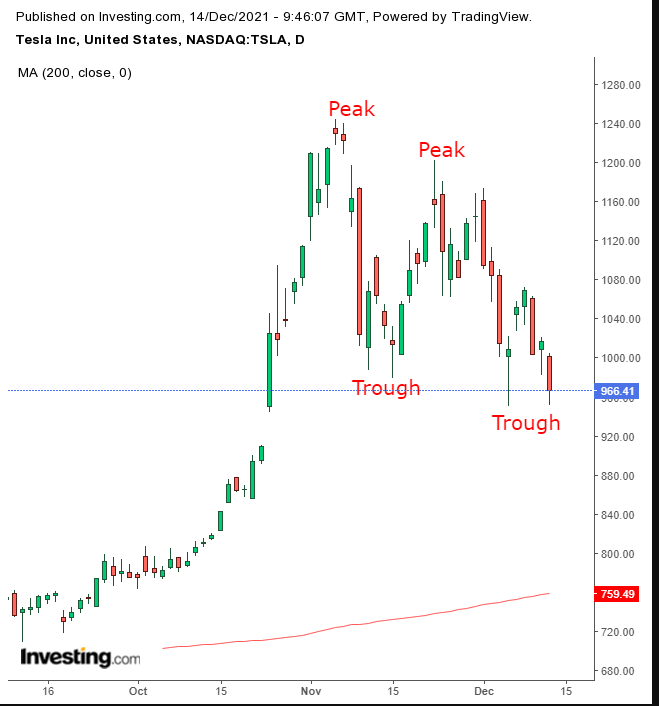 The electric vehicle maker completed a peak-trough reversal, though stricter technical analysts would wait for another peak-trough pair, independent of the preceding uptrend. 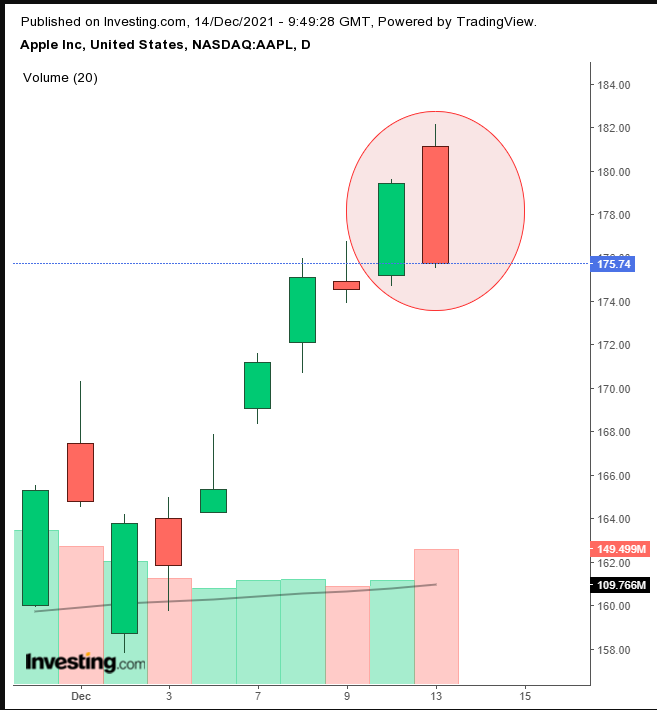 The iPhone maker’s price action developed a bearish pattern, a Dark Cloud Cover that opened higher than the preceding day, but closed deeply into its candle—on high volume.

In addition, travel-related companies such as cruise operators, airlines and hotels, all fell.

Yields on the 10-year Treasury reversed a bit from yesterday’s sharp decline. Investors have been hoarding bonds amid the equity selloff. 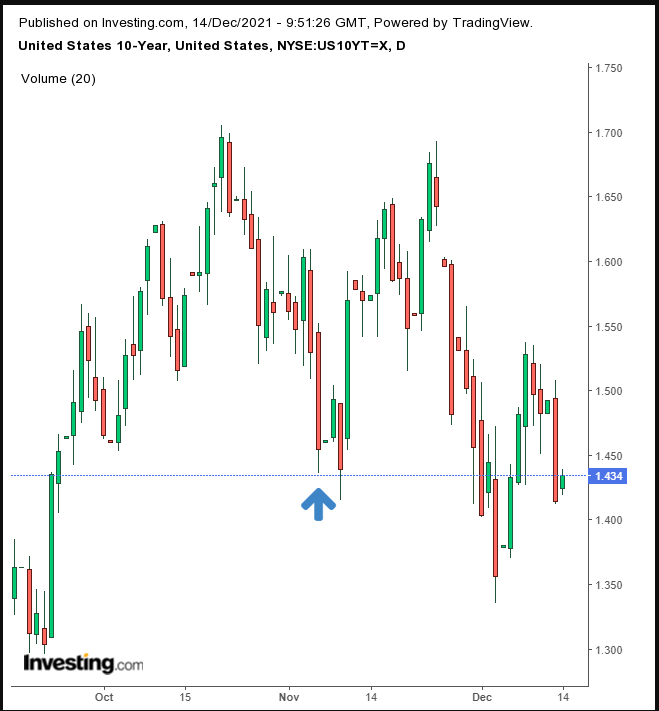 Rates stopped right on the neckline of a top.

The dollar was little changed, having given up an earlier advance. 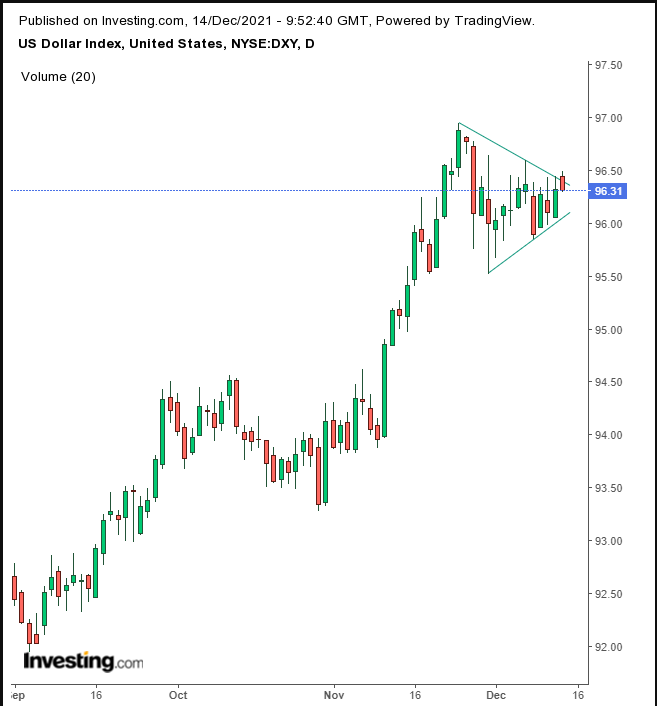 The greenback’s upmove seemed to have been thwarted by the resistance generated by the top of a bullish pennant. 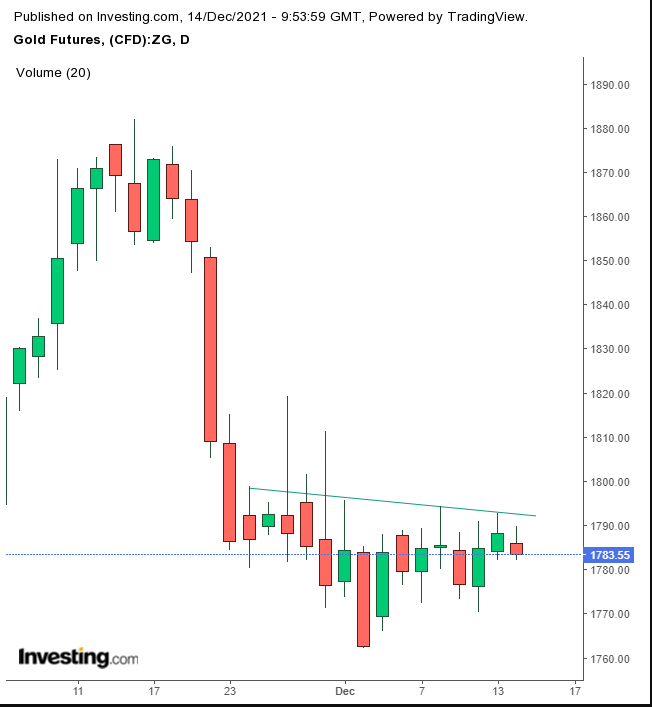 The yellow metal may be developing a small H&S bottom.

Bitcoin was hovering at its lowest levels since September, after having fallen below the digital token’s uptrend line since the mid-Jul low. There are a number of reasons BTC’s little brother, Ethereum, which so far has been one of 2021’s best crypto performers, could continue outperforming Bitcoin.

Oil fell as traders reacted to the possibility of social restrictions which could weigh on demand. However, WTI prices remained within the same cluster in which they’ve been trading for the sixth session. 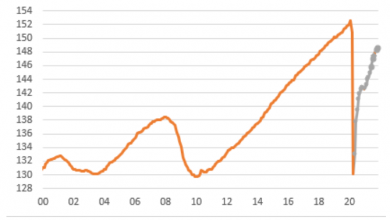 U.S. Economy Held Back By A Lack Of Willing Workers 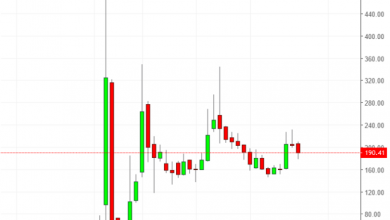 GameStop: With New Management, Is This Reddit Darling A Stock Worth Betting On? 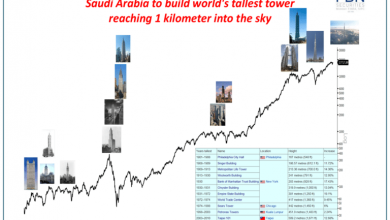 CNBC Index Of MoMo Stocks A Sign Of Exuberance 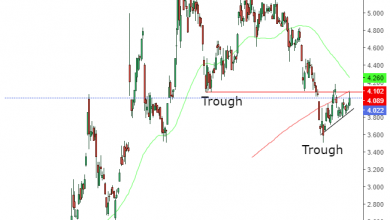