The data shows the Fed is behind the surging wealth gap. Such is despite protestations and do not affect the financial markets. Such was noted previously by Minneapolis Fed President Neel Kashkari:

While he may be there is ample evidence of a direct impact on financial markets. As discussed in 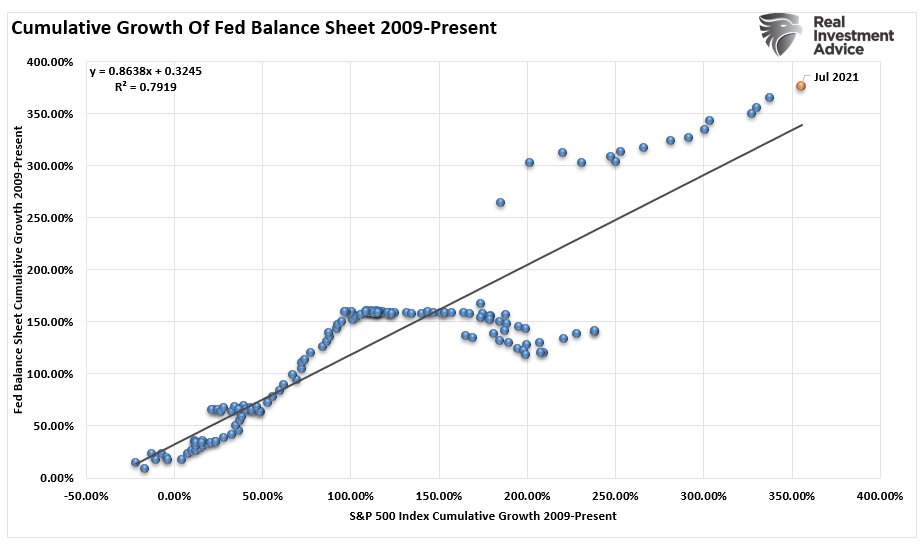 There is little question the Fed is behind surging asset prices. However, are they to blame for rising inequality and the suggested the Fed is not responsible. To wit:

While Rogoff suggests fiscal policy should be used such distributional policies harm economic growth and a widening of inequality.

While there is ample evidence the liquidity from the Fed’s actions does indeed directly impact asset prices, we will focus on the non-direct impact.

In 2010, then-Fed Chairman Ben Bernanke made the following statement as they prepared to launch the second round of QE.

What he is referring to is known as

Animal spirits came from the Latin term “ which means the Its modern usage came about in John Maynard Keynes’ 1936 publication, “Ultimately, “animal spirits was adopted by Wall Street to describe the psychological factors driving investor actions.

Specifically, Ben Bernanke realized that investors would respond to that stimulus and push asset prices higher by providing accommodation. Such is the “ in action.

The Exacerbated The Wealth Gap

However, while the Federal Reserve got the desired outcome of increasing asset prices, failed to Despite the massive expansion of the Fed’s balance sheet and the surge in asset prices, there was relatively little translation into wages, full-time employment, or corporate profits after tax which ultimately triggered very little economic growth. The problem, of course, is the surge in asset prices remained confined to those with but failed to deliver a boost to the roughly 90% of American’s who have experienced little benefit. Since 2007, the stock market has returned nearly 200%, which is more than twice the growth in GDP and nearly 4-times the growth in corporate revenue. This disconnect is a function of the nearly $8 trillion increase in the Fed’s balance sheet, hundreds of billions in stock buybacks, PE expansion, and ZIRP. With ratios at the highest level in history, one should question the ability to continue borrowing from the future?

As noted by the WSJ previously:

As stated, the Fed’s actions have exacerbated the wealth gap by enormous proportions. The chart below is the inflation-adjusted household equity ownership to GDP ratio by brackets versus the Fed balance sheet. If you review the quote by Ben Bernanke above, you will note:

With housing prices at all-time highs, hundreds of billions pushed into businesses through a multitude of Government bailouts, and trillions provided to consumers through stimulus payments, the real total net worth of the top 10% has exploded. We can see the invisible hand of the Fed’s balance sheet once again. Household Net Worth to GDP and Fed

Every three years, the Federal Reserve releases a study on consumer finances. The study is a stockpile of data on everything from household net worth to incomes. While the mainstream media contends surging asset prices boost economic growth, the reality is quite different.

If we strip out the impacts caused by outliers, the value of financial assets fell sharply since the turn of the century. 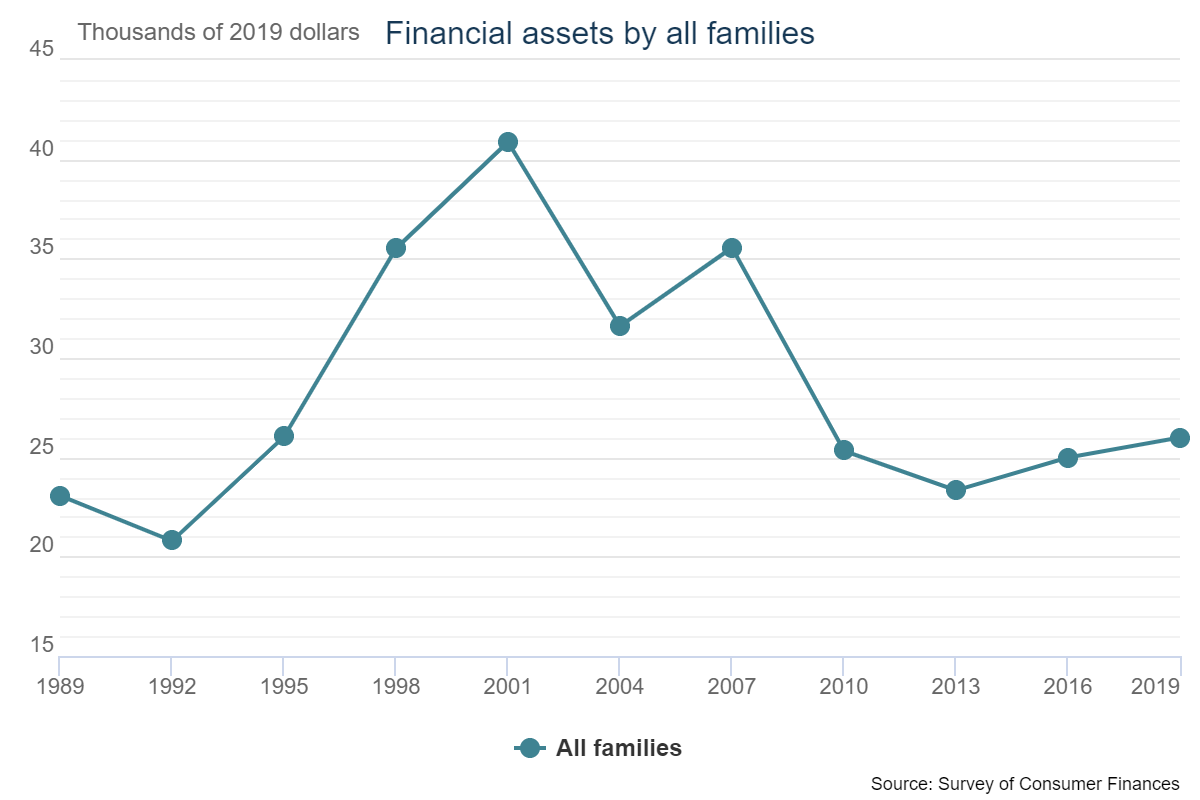 Financial-Assets Median Value Of All Families

The Federal Reserve hoped inflating asset prices would boost consumer confidence, consumption, and economic growth. The problem is that with falling incomes and rising living costs, the ability to save and invest eluded most families.

It is also stated with regularity that own assets through their company retirement plans and are therefore building wealth. But, again, the reality is quite different. The percentage of families with retirement accounts is lower today than in 2001, despite surging asset prices. 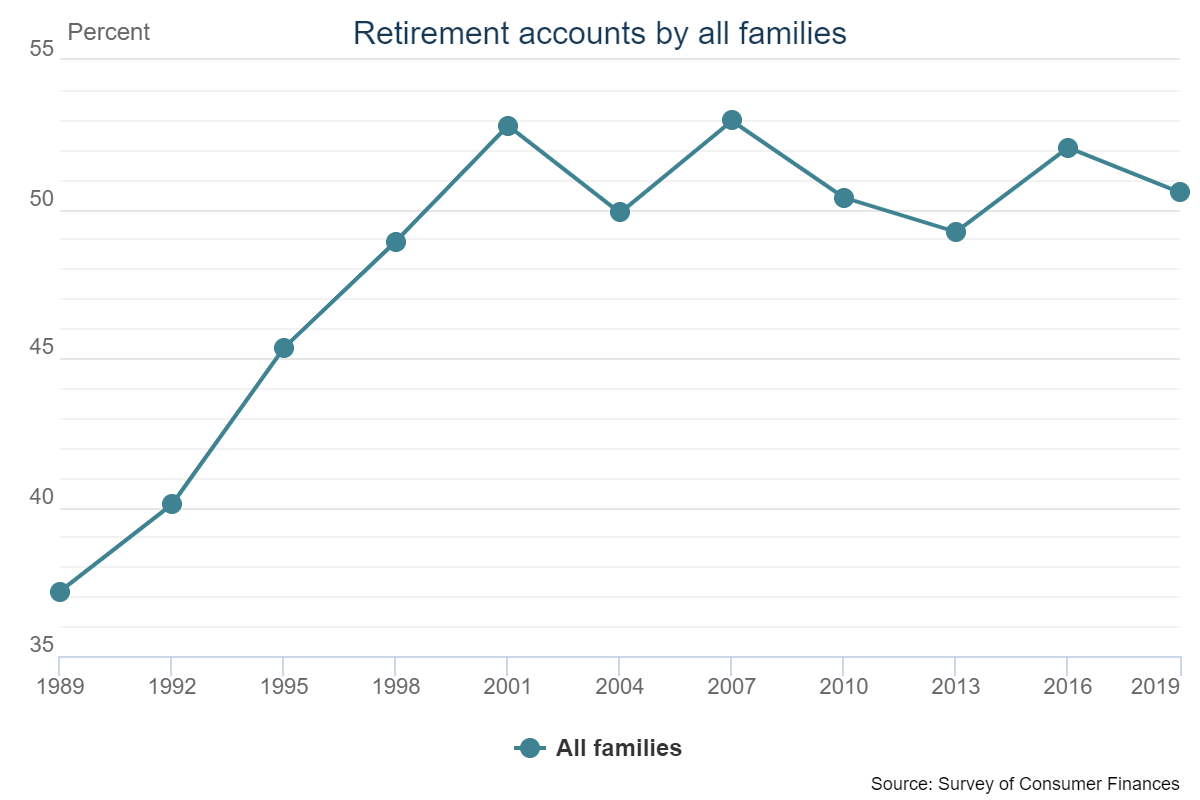 Unless you happen to be in the top 10-20% of income earners. 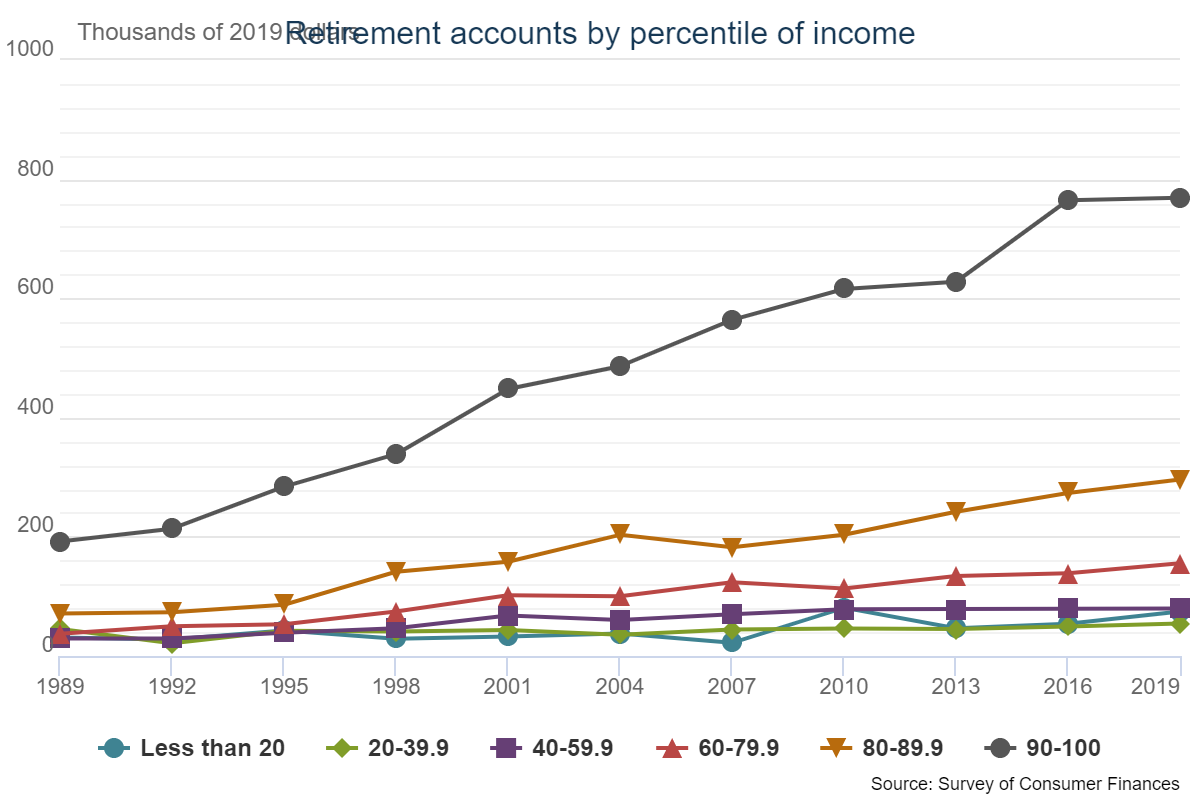 Lastly, a large chunk of wealth for the top 10% of income earners comes from business equity. The Fed’s ongoing suppression of interest rates has led to extremely cheap financing costs to leverage businesses and boost profitability. 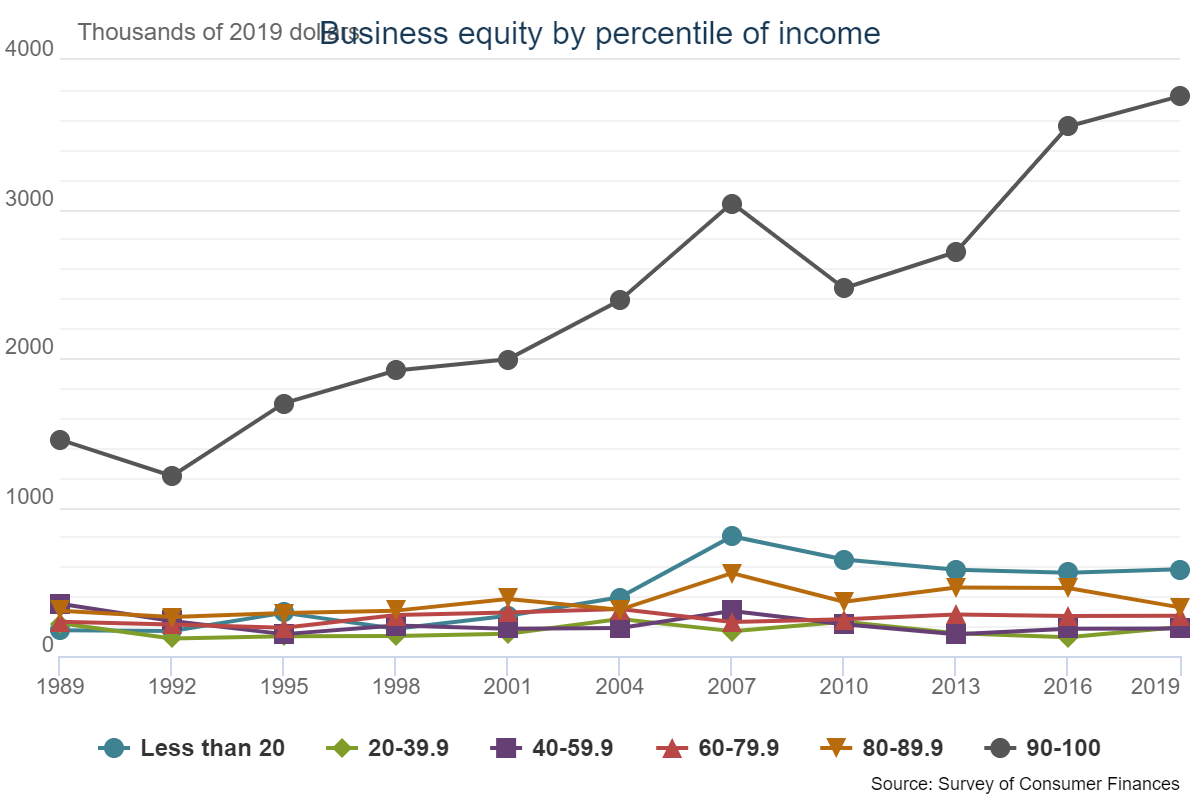 The lack of economic improvement is evident across all data points. However, the evidence is clear the Fed’s financial engineering has created a massive wealth gap within the economy. Furthermore, the ongoing interventions fueled the demand for speculative risks by those with capital but left most American families behind.

While the Federal Reserve will occasionally feign concern over the and they are aware they are responsible for it. The problem remains the inability to remove the accommodative policy as the begins to deflate rapidly.

Given the amount of debt currently required to sustain current economic growth, the Fed has no choice but to continue monetization of the Federal debt indefinitely.

Such leaves only TWO possible outcomes from here, both of them are not good. 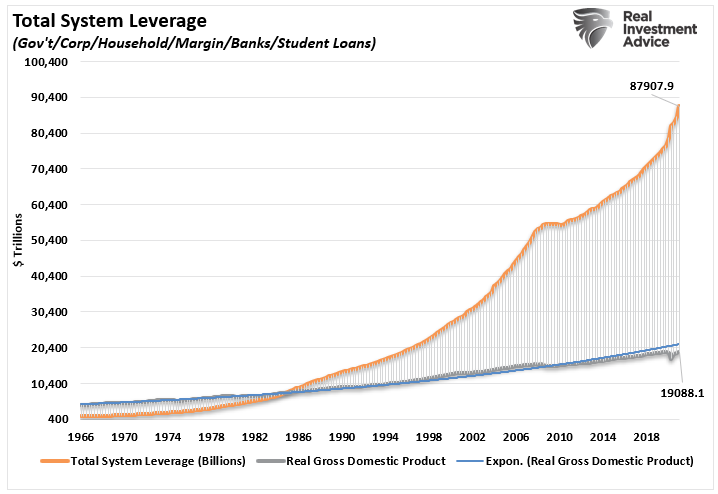 The Fed continues to state that monetary accommodation will continue until However, given that economic stability was not achieved in the last decade, it is highly unlikely that doubling the Fed’s balance sheet will improve future outcomes.

Unfortunately, given we now have a decade of experience of watching the worsen under the Federal Reserve’s policies, the next decade will likely not show an improvement. We now know that surging debt and deficits inhibit organic growth. The massive debt levels added to the backs of taxpayers will only ensure the Fed remains trapped at the zero bound. The rise and fall of stock prices have very little to do with the average American’s participation in the domestic economy. Interest rates and inflation are entirely different matters.

Given the current demographic, debt, pension, and valuation headwinds, the future growth rates will be low over the next couple of decades. Even the Fed’s own economic growth rates currently run below 2%.

The catalysts needed to create the economic growth required to out of the debt problem are not available today. Nor will they be in the future.

Ultimately, the Federal Reserve, and the Administration, will have to face hard choices to extricate the economy from the current However, history shows that political leadership never makes the choices until they get forced upon them.

You don’t have to look much further than Japan for a clear example of what I mean. 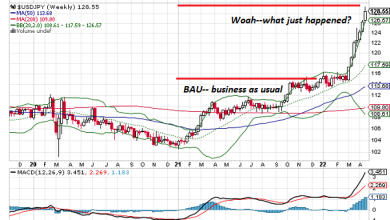 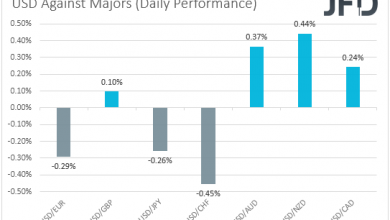 Market Sentiment Improves, But Only Temporarily