The US dollar gained against all the other major currencies yesterday and today in Asia, while equity indices around the globe slid.

With oil prices surging, it seems that concerns over accelerating inflation returned, especially with the US CPIs scheduled to be released later in the day.

After that, during the Asian trading Thursday, Australia releases its employment data for October, while during the early European trading, the preliminary UK GDP for Q3 will be out.

US Dollar Rebounds, Equities Slide Ahead of the US Inflation Numbers

The US dollar rebounded against all the other major currencies on Tuesday and during the Asian session Wednesday. It gained the most versus NZD and AUD, while it eked out the least gains versus JPY, CHF, and CAD. 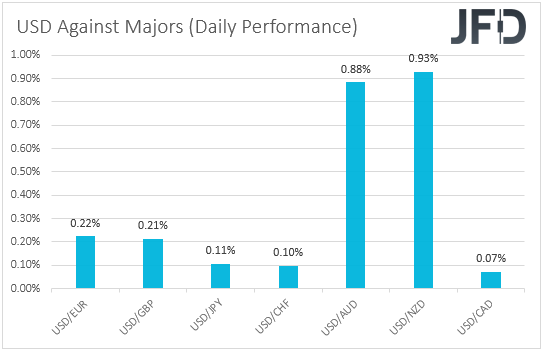 The strengthening of the US dollar, the fact that the safe-havens yen and franc stood relatively tall as well, and the weakening of the risk-linked Kiwi and Aussie, suggest that markets may have traded in a risk-off fashion yesterday and today in Asia.

The Loonie, considered a risk-linked currency, performed very well. But its resilience may be the result of yesterday’s surge in oil prices. Remember that Canada is the world’s fifth-largest oil-producing nation, while it holds fourth place in terms of exports.

Turning our gaze to the equity world, we see that stock indices around the globe were a sea of red, with the only exceptions among the ones under our radar being Spain’s IBEX 35 and Hong Kong’s Hang Seng. 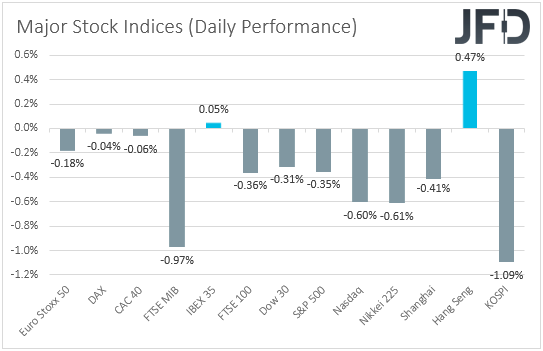 It seems that the rally in oil prices may have sparked fresh concerns over accelerating inflation. With the US CPIs on today’s agenda, market participants may have decided to reduce their risk exposure.

Remember, yesterday we noted that, although our view regarding the broader picture remains positive, we choose to take the sidelines heading into today’s data. 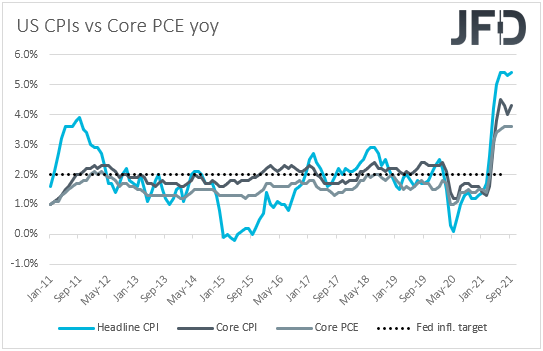 At its latest gathering, the Fed began its tapering process as expected, and Fed Chair Powell said that they will stay patient on interest rates. However, he did not exclude the possibility of raising them soon after the tapering is over if the economic outlook warrants so.

According to the Fed funds futures, market participants are currently fully pricing in a 25 bps hike to be delivered in September next year. Accelerating inflation could encourage them to bring that timing forth. This may promote more US dollar buying, while it could result in further retreat in equities.

However, we expect the retreat to be just a corrective one and not a long-lasting reversal. We believe that more data pointing to economic resilience could encourage more stock buying, despite expectations over sooner and faster rate hikes. After all, investors seem to have already digested the idea of higher rates soon. 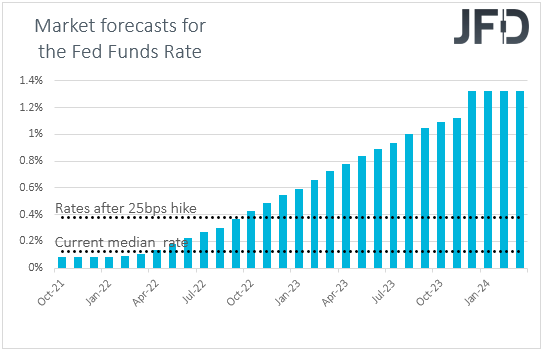 The Dow Jones Industrial Average cash index traded lower yesterday and today, during the early Asian morning, it hit support at 36165. Overall, the index continues to trade above the upside support line drawn from the low of Oct. 1, and thus, even if we see some further retreat, as long as it stays above that line, we will still consider the outlook to be positive.

The setback may continue below 36165, and perhaps reach the 35885 zone, marked by the low of Nov. 3. The bulls may take charge from there again and perhaps go for another test near the current record high of 36560, hit on Monday.

If they don’t stop there this time around and decide to enter uncharted territory, then we could see them climbing towards the psychological round number of 37000. In order to abandon the bullish case, we would like to see a clear dip below 35495, which is the low of Oct. 28.

This could signal the break below the upside line taken from the low of Oct. 1 and could trigger a slide towards the 35025 zone, defined as a support by the low of Oct. 18. If that area is not able to stop the fall either, then we may experience extensions towards the 34600 zone, marked by the inside swing high of Oct. 12.

As for tonight, during the Asian session Thursday, Australia releases its employment report for October. The unemployment rate is expected to rise to +4.8% from 4.6%, while the net change in employment is forecast to show that the economy has added 50,000 jobs after losing 138,000 in September.

In our view, a 50,000 jobs gain is not encouraging news, if we take into account that apart from the 138,000 loss in September, the Australian economy lost even more jobs in August, around 146,000.

Thus, combined with a potential increase in the unemployment rate, we would expect market participants to push further back their expectations with regards to a rate increase by the Reserve Bank of Australia (RBA), and perhaps push the Aussie lower. 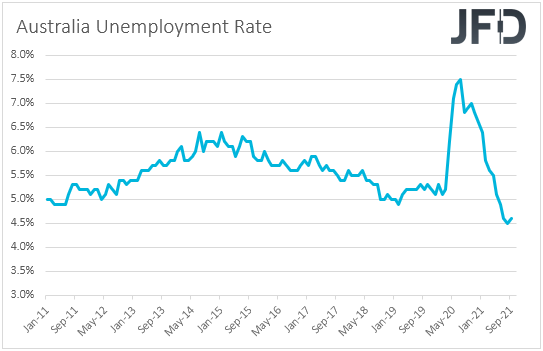 Remember that last week, the RBA appeared more hawkish than previously, saying that it could start raising interest rates in 2023 instead of 2024 as per its previous guidance. However, market participants were even more hawkish, anticipating a hike around the middle of next year and seeing rates hitting 1.25% by the end of the year. Thus, the RBA’s view was seen as a disappointment and a soft employment report could add more credence to it.

A few hours later, during the early European morning, we get the preliminary UK GDP for Q3, alongside the nation’s industrial and manufacturing production rates for September. Economic activity is expected to slow to +1.5% QoQ from +5.5%, while both the industrial and manufacturing production rates are anticipated to slide to +0.1% MoM, from +0.8% and +0.5% respectively. 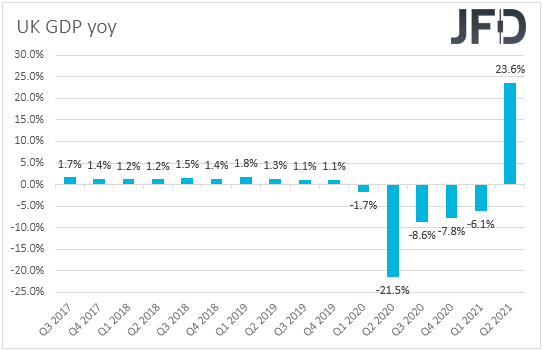 On Monday, the pound rebounded strongly following remarks by BoE Governor Andrew Bailey, who said that they are on a path towards raising interest rates, which may have revived expectations over a December move. However, we are reluctant to trust Bailey.

Remember that a couple of weeks ahead of last week’s gathering, he said that they have to act to contain inflation expectations, comments which encouraged market participants to price in an 80% chance for a hike at that meeting. Eventually, officials decided not to hike and instead said that this could happen in the “coming months”.

A potential economic slowdown could increase speculation that a rate hike may eventually be delivered in the first months of the new year instead of December, and thereby result in a new negative wave in the pound

AUD/USD traded lower yesterday, after it hit resistance at 0.7430. Overall, the pair continues to print lower highs and lower lows as marked by the downside resistance line drawn from the high of Nov. 2, while, at the time of writing, it seems to be trading slightly below the 0.7360 support zone, marked by the low of Nov. 5. All these technical signs paint a negative near-term picture in our view.

The break below 0.7360 may have already confirmed a forthcoming lower low and perhaps opened the path towards the 0.7330 zone, which provided support on Oct. 12 and 13. If that zone is not able to halt the slide, we could experience extensions towards the 0.7290 area, marked by the low of Oct. 11, the break of which could carry larger bearish implications, perhaps setting the stage for the low of Oct. 6, at 0.7225.

On the upside, a break above the 0.7430 zone would signal a forthcoming higher high and also confirm the break above the aforementioned downside line. This could encourage the bulls to climb towards the 0.7460 area, the break of which could target the 0.7485 zone, marked by the low of Nov. 1.

If that zone is not able to halt the advance either, then its break may set the stage for extensions towards the high of the same day, at around 0.7535.

As for the Rest of Today’s Events

Besides the US CPIs, the only other release worth mentioning on today’s agenda is the EIA report on crude oil inventories for last week. Expectations are for a 2.125 million barrels inventory build, slightly less than the prior 3.291 million.

That said, bearing in mind that, yesterday, the API reported a 2.485 million barrels slide, we would consider the risks surrounding the EIA forecast as tilted to the downside, something that could increase the buying pressure in oil prices. We also have two central bank speakers on the schedule and those are European Central Bank (ECB) Executive Board member Frank Elderson and Bank of England (BoE) MPC member Silvana Tenreyro. 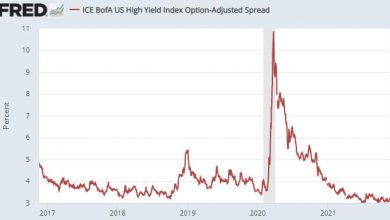 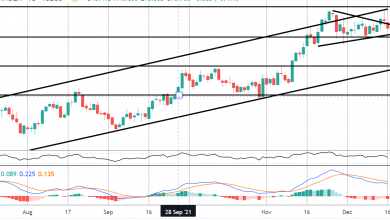 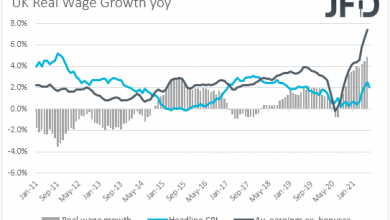 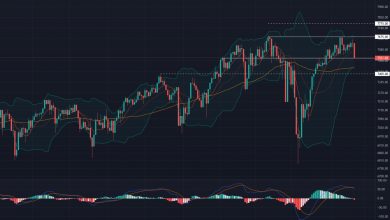