Two Sides of the Same Coin

With the Delta variant decelerating U.S. economic momentum, the chorus proclaiming ‘peak growth’ is growing louder by the day. And as the colder months approach and outdoor activities fail to stimulate consumer spending, economists have sounded the alarm on the U.S. economic Renaissance.

Case in point: Goldman Sachs has reduced its third-quarter GDP growth estimate three times, and the investment bank expects Q4 and full-year 2022 to come in weaker than expected. 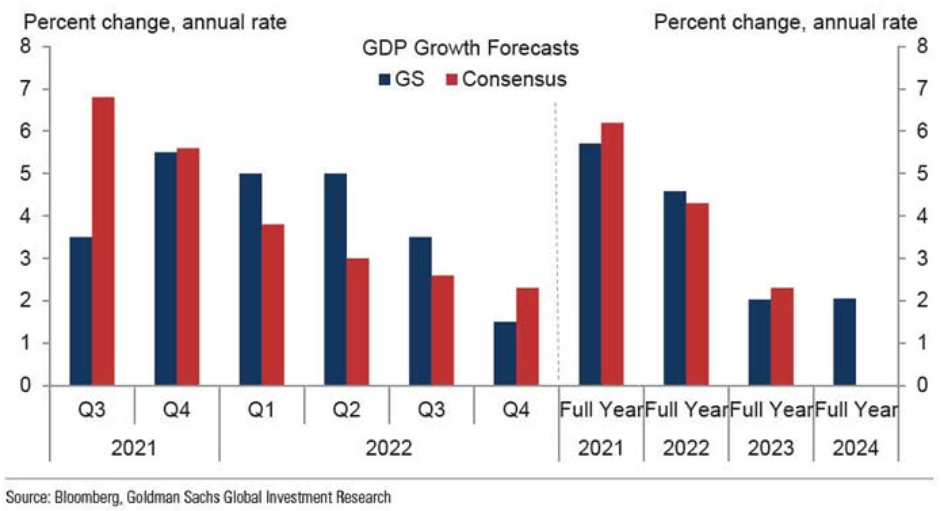 To explain, the blue bars above track Goldman Sachs’ GDP growth estimates, while the red bars above track economists’ consensus estimates. If you analyze the columns labeled “Q4” and “Full Year 2022,” you can see that Goldman Sachs (NYSE:GS) expects a sharper-than-expected slowdown in the autumn months, and the weakness should persist into 2022.

Alongside, economists’ consensus estimates for the third and fourth quarters have also come down. 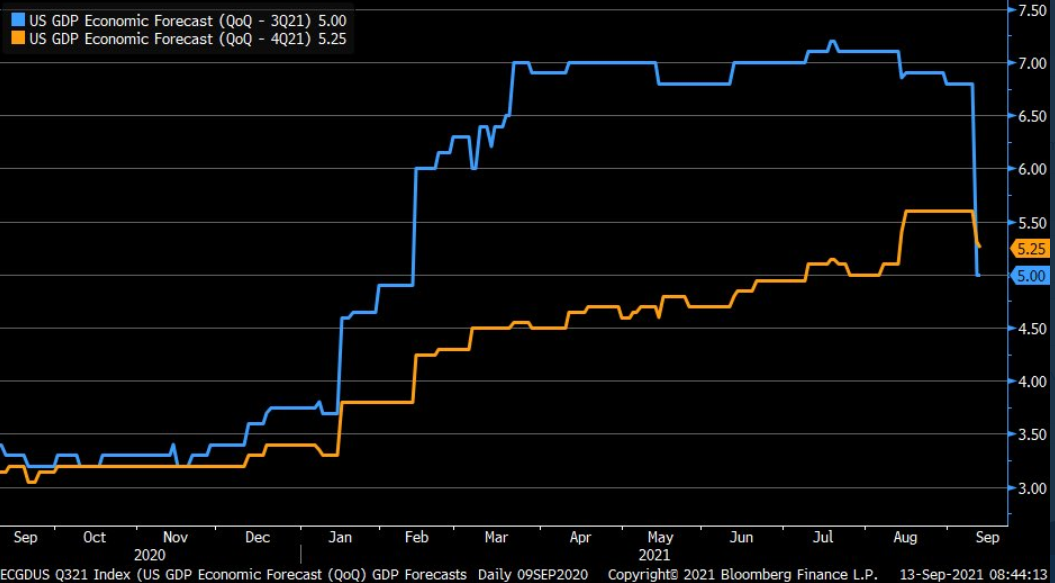 To explain, the blue and orange lines above track economists’ consensus GDP growth estimates for the third and fourth quarters. If you analyze the right side of the chart, you can see that the blue line has fallen sharply and that the orange line is slowly following suit.

And upping the bearish ante, the Atlanta Fed’s GDPNow estimate for the third quarter has sunk well below Goldman Sachs and Bloomberg’s consensus estimates, with the metric nearly halving in the last month alone. 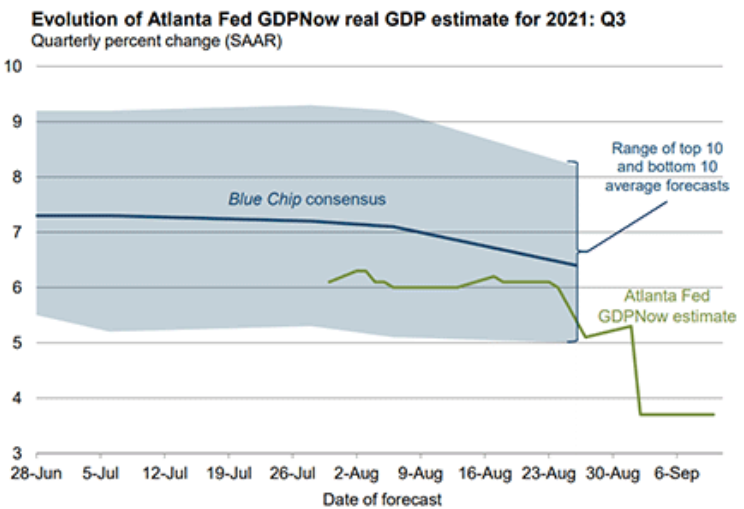 To explain, the blue line above tracks the Blue Chip consensus GDP growth estimate for the third quarter, and the shaded blue area represents the range of economists’ estimates. If you analyze the depth, you can see that economists expect a print in the ~5% to ~8% range. In stark contrast, the green line above tracks the Atlanta Fed’s GDPNow estimate – which implies 3.7% GDP growth in the third quarter.

More importantly, though, if growth falls off a cliff and the U.S. recovery is derailed, the doom and gloom could actually uplift the gold prices.

Well, while a major slowdown in U.S. growth could reduce U.S. Treasury yields and increase gold’s attractiveness as a bond proxy, the U.S. dollar’s uprising will likely outweigh any bullish potential. For example, when GDP growth decelerates and investors flock to safe-haven assets, the U.S. dollar is a primary beneficiary. And with gold, silver and mining stocks exhibiting strong negative correlations with the U.S. dollar, the PMs often suffer in the process. 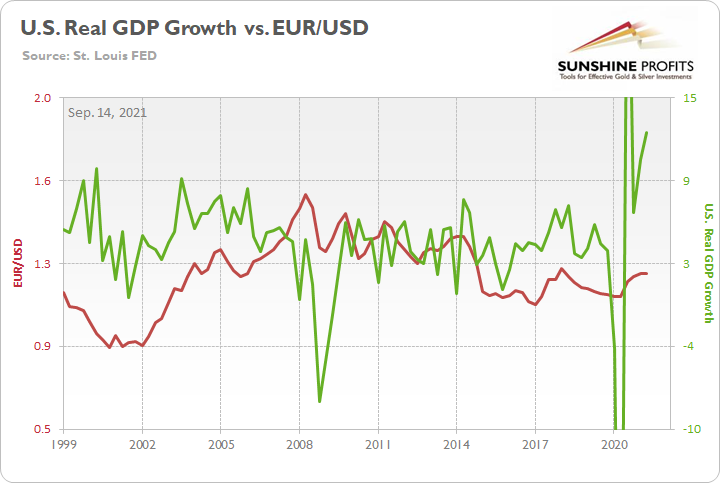 US Real GDP Growth Vs EUR/USD

To explain, the green line above tracks the annualized percentage change in U.S. real GDP, while the red line above tracks the EUR/USD. For context, the EUR/USD accounts for nearly 58% of the movement of the USD Index. If you analyze the relationship, you can see that troughs in U.S. GDP growth often coincide with troughs in the EUR/USD. For example, when the U.S. entered recession in 2001, 2008 and 2020, the EUR/USD declined precipitously and helped fuel the USD Index’s uprising. Thus, with the PMs often moving inversely of the U.S. dollar, they’re unlikely to celebrate a decline in U.S. GDP growth.

Delta Variant Fades, Inflation… Not So Much

Furthermore, while the U.S. economy will likely regain its momentum once the Delta variant dissipates, the weakness in U.S. GDP growth could prove transient. In stark contrast, however, inflationary pressures remain robust, and the surge could elicit hawkish rhetoric from the Fed during its September 21/22 monetary policy meeting. To explain, the Wall Street Journal (WSJ) published a rather cryptic article on Sep. 10 titled: “Fed Officials Prepare for November Reduction in Bond Buying.” And with Chairman Jerome Powell promising “advance notice” before a formal announcement commences, the September meeting could be used to brace investors for what’s to come.

Furthermore, since the WSJ is considered the unofficial mouthpiece of the Fed, Goldman Sachs chief economist Jan Hatzius told clients on Sep. 11 that the article has moved the taper needle. He wrote:

“Earlier today, the Wall Street Journal published an article titled “Fed Officials Prepare for November Reduction in Bond Buying.” The article went on to state that officials “will seek to forge agreement” on November as the beginning of “scaling back” accommodation, and it subsequently cited several public remarks about tapering from Chairman Powell and other members of the leadership. Reflecting this, we are increasing our subjective odds of a November taper announcement. We now see 70% odds of a November announcement (vs. 45% previously) and 10% odds of a December announcement (vs. 35% previously); we continue to see a 20% chance that growth risks related to the Delta variant delay the tapering announcement into 2022.”

Thus, if a formal announcement is scheduled for November, hawkish hints will likely emerge at the Fed’s upcoming meeting.

In the meantime, though, surging inflation should be keeping Powell up at night. For example, Apollo Global Management (NYSE:APO) CEO Marc Rowan – whose firm has $472 billion in assets under management as of June 30 – said on Sep. 13 that inflation is “everywhere.”

“There’s not a place [where we are not seeing it]. Everything that we once did now costs more,” he told CNBC’s Leslie Picker as part of “Delivering Alpha.” “Lead times, pressure on inventory, pressure on supplies, pressure on employment. Our experience in our portfolio is really no different than the broader economy.” 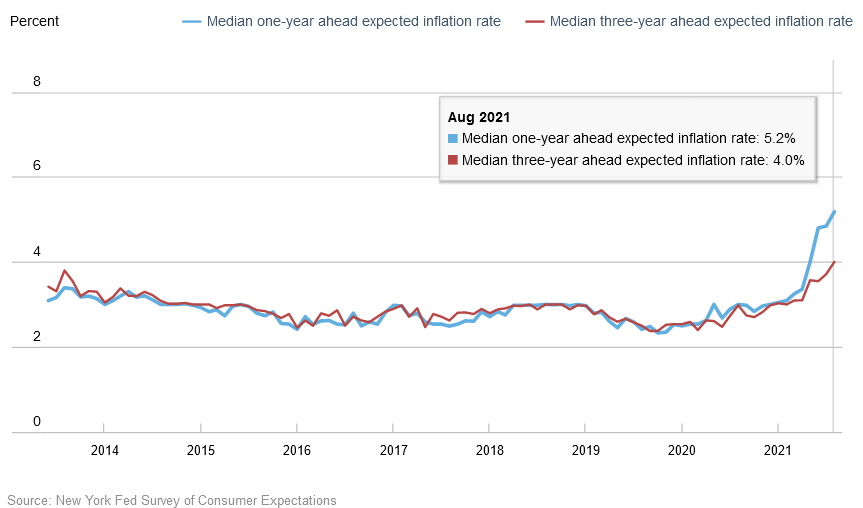 In addition, while I’ve warned on several occasions that the Shelter Consumer Price Index (CPI) could accelerate the inflationary momentum during the autumn months, U.S. consumers are already bracing for a surge in rent inflation. 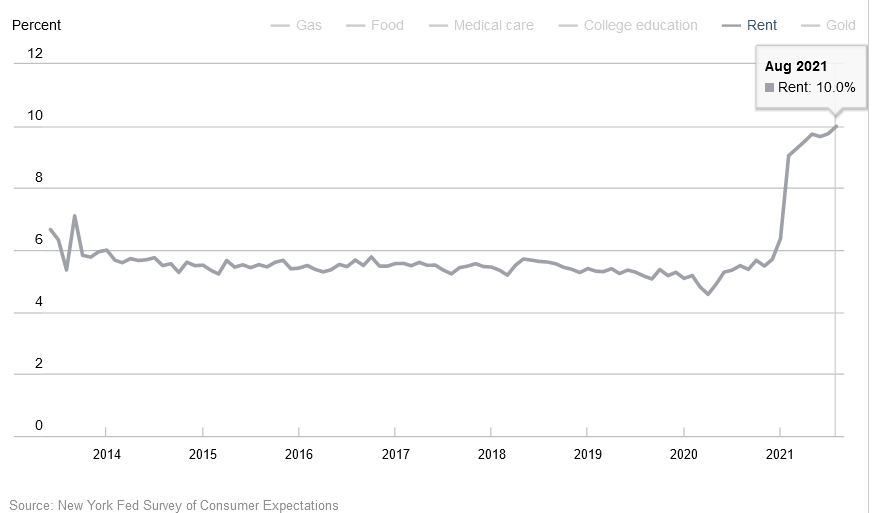 Base Effects Are Long Gone

Finally, with the U.S. headline CPI likely to sizzle today and weak comparable periods no longer relevant, notice how deflationists no longer cite “base effects” anymore?

If we analyze the performance of the pair during the inflationary surges of the 1970s and the early 1980s, it’s clear that the relationship has stood the test of time. 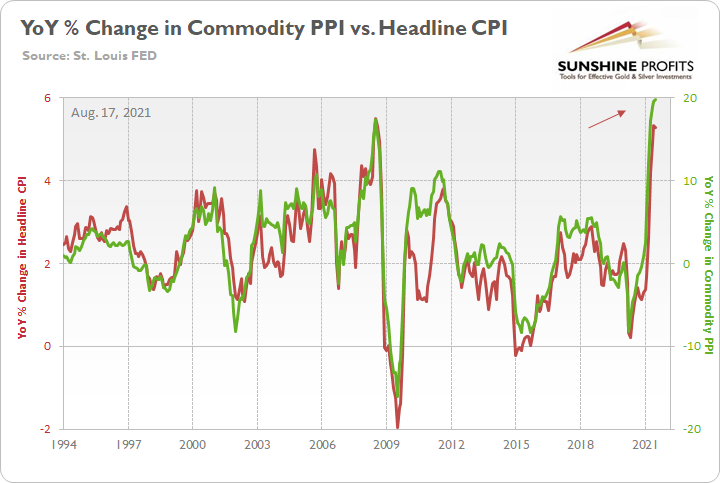 The bottom line? With another 5%+ headline CPI print likely to hit the wire today, inflation is more than 2.5x the Fed’s annual target. And with “base effects” long gone and several Fed officials lobbying for an immediate taper, pressure on Powell should accelerate in the coming weeks.

In conclusion, while gold and the gold miners rallied on Sep. 13, their medium-term outlooks remain extremely treacherous. And with the Fed’s taper timeline shortening by the day, a hawkish surprise on Sep. 21/22 could lead to another sell-off. Moreover, with the USD Index holding firm and decelerating economic growth poised to add to the greenback’s momentum during the autumn months, the PMs’ performance will likely cool alongside the fall temperature. 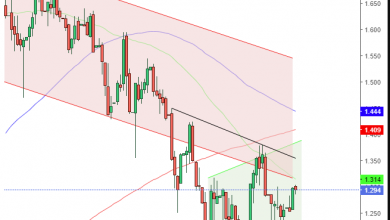 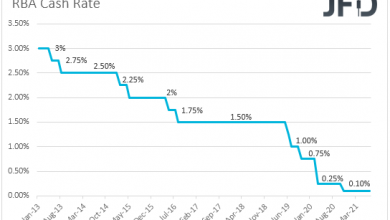 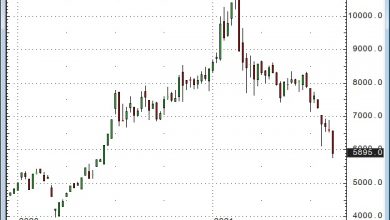 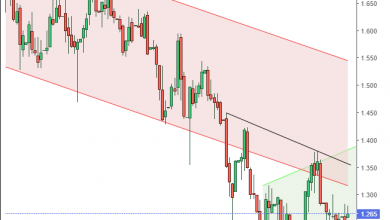