This week appears very busy in terms of scheduled events on the economic agenda. From Australia, we get the minutes from the latest RBA meeting, and the employment report for July, while in New Zealand, the RBNZ decides on interest rates and it is widely anticipated to push the hike button.

In the US, the FOMC releases the minutes of its latest gathering, but ahead of that we will get to hear by Fed Chief Powell. We also get a bunch of UK and Canadian data.

On Monday, we already got Japan’s GDP for Q2 and China’s fixed asset investment, retail sales and industrial production, all for the month of July.

The rest of the day appears to be relatively light with no major data or events on the agenda.

On Tuesday, during the Asian session, the RBA releases the minutes of its latest monetary policy meeting. At that gathering, the RBA confirmed that it will continue buying bonds, beyond September, although at a slower pace, while officials confirmed that interest rates are likely to stay at present levels at least until 2024.

The Aussie traded higher at the time of the release, perhaps as its traders may have been anticipating a more dovish language, perhaps hints that the Bank could ease policy further if needed. With all that in mind, we will scan the minutes to see whether there are any clues or hints on what officials intend to do if economic data keeps coming on the soft side. 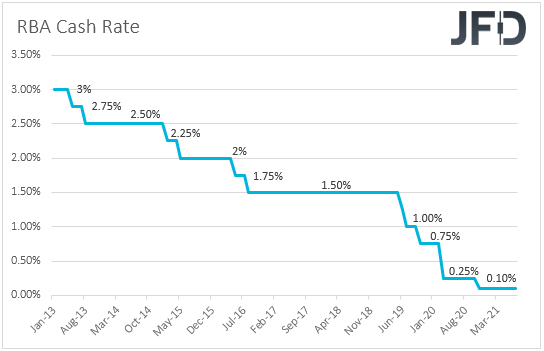 RBA_rates
Our own view is that we will not get a clear message on that front. However, a soft employment report on Thursday could increase speculation that the RBA may stay dovish for longer, and thereby keep the Aussie under selling interest. Recently, we’ve been advocating for a lower AUD/NZD, given expectations for a rate hike by the RBNZ at this week’s gathering. That said, we now prefer to take the sidelines and wait for the RBNZ outcome before we draw any conclusions with regards to this pair’s forthcoming direction.

During the early EU session, the UK employment report for June is coming out. The unemployment rate is forecast to have held steady at 4.8%, while average weekly earnings, both including and excluding bonuses, are expected to accelerate to +8.7% yoy and +7.4% yoy, from +7.3% and +6.6% respectively. In our view, accelerating wage growth could soon translate into accelerating inflation, and with UK inflation already above 2.0%, this could add to the case for the BoE to start scaling back its QE purchases sooner than previously anticipated. 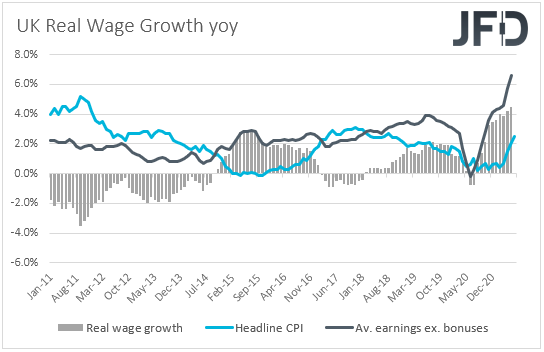 UK_wages
That said, we believe that the pound is unlikely to receive massive support and the reason we believe so is because market participants may have already discounted the case for earlier tapering after the BoE changed its forward guidance at its prior monetary policy gathering, and due to the fact that the CPIs, due out on Wednesday, are forecast to have slowed somewhat.

Remember that, at its latest gathering, the BoE lowered the threshold of when they will start reducing their stock of bonds. Specifically, they said that they will do so when the policy rate hits +0.50%, by not reinvesting the proceeds of maturing debt. The previous guidance was for the Bank to not start unwinding its bond purchases until interest rates were near +1.5%.

We don’t expect the greenback to react much on those releases, and the reason is that, a few hours later, we will get to hear from Fed Chief Powell himself. Investors could get a more direct view on the Fed’s future course of action. At the prior gathering, the Committee kept its policy unchanged, but although officials repeated that they will keep the pace of their QE purchases unchanged until “substantial further progress has been made” towards their goals, they added that the economy has made such progress, and that they will continue to assess the progress in coming meetings.

Having said all that though, at the press conference following the decision, Fed Chief Powell said that the labor market has still a long way to go, and that inflation is still expected to fall back to their longer-run goals. He also added that the timing of taper will depend on incoming data and that they will provide advance notice before any changes, something that may have poured cold water on expectations of an early tightening.

Since then though, several Fed officials, including Vice Chair Richard Clarida, expressed a more hawkish view than Powell did, while the employment report for July came in stronger than anticipated.  All this may have revived speculation for early tapering by the Fed, perhaps as early as next month, and that’s why the greenback has been on an uptrend mode recently.

The CPIs slowed somewhat on Wednesday on a mom basis and the dollar retreated, but the PPIs accelerated further on Thursday, suggesting that inflation may have not hit a ceiling yet. 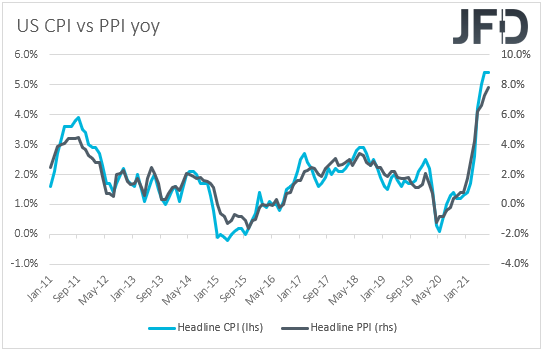 US_CPIvsPPI
With all that in mind, it would be interesting to see whether Powell has changed his mind or not. Investors may be eager to find out whether indeed the Fed is planning to start its tapering process soon, and if so, what would be the reduction pace. Currently, the Fed is buying USD 120bn worth of assets per month. So, a USD 20bn taper means that the program will end in six months, and thereby allow even earlier rate hikes, while withdrawing only half of that amount would take a full year.

In case Powell sticks to his dovish stance, the dollar is likely to pull back, but still, we don’t believe that this would result in a reversal. The officials expressing a more hawkish view appear to outnumber the doves, while we will have another chance of getting a clearer view on the Fed’s plans at the Jackson Hole economic symposium, where more policymakers may step up to the rostrum.

On Wednesday, the main event on the agenda may be the RBNZ monetary policy decision. At its latest meeting, this Bank kept interest rates unchanged at +0.25%, and although we have been expecting an optimistic language, the statement was even more hawkish than what we (and apparently many other market participant) have been anticipating.

Officials announced that they will end their Large-Scale Asset Purchase (LSAP) program the week after the meeting, while data since then have been on the bright side, with the better-than-expected employment report for Q2 cementing expectations over a rate hike at this gathering. 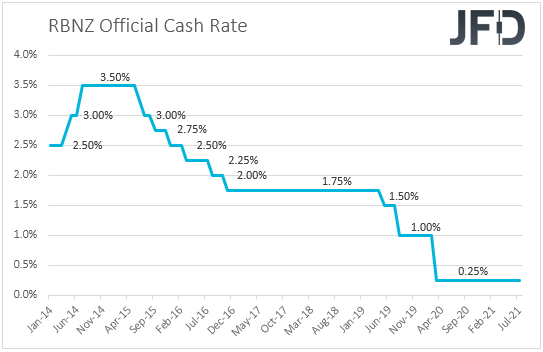 RBNZ_rates
Indeed, the forecast points to a 25bps rate increase, to +0.50% from +0.25%, but according to market chatter there is some speculation over a double hike as well. In any case, we do expect a rate hike, but not a double one. Now, as far as the Kiwi’s reaction is concerned, we don’t believe that a 25bps hike will be enough to add fuel to the currency’s uptrend. The move is already discounted. Thus, in order for the Kiwi to continue its upside trajectory, officials may need to signal that more tightening is on the cards for the months to come, or they may have to proceed with a 50bps hike, a case that, as we already noted, we see as unlikely.

Later, during the early EU session, we get the UK CPIs for July. Both the headline and core rates are expected to have declined somewhat, but to have stayed above the BoE’s objective of 2%. The headline rate is expected to have slid to +2.3% yoy from +2.5%, while the core one is anticipated to have ticked down to +2.2% yoy from +2.3%. This is unlikely to hurt expectations around an earlier QE tapering by the BoE, but it could prevent GBP traders from adding fresh long positions. UK_CPIs
From the US, we get the minutes from the latest FOMC gathering, but bearing in mind that we’ve heard the views of several policymakers since then, as well as that we will get to hear from Chief Powell this week, we will treat this release as outdated this time around. Market participants are likely to hold on to the positions adjusted in the aftermath of Powell’s speech on Tuesday. As for the US data, we have building permits and housing starts, both for July. Building permits are expected to have increased somewhat, but housing starts are anticipated to have slightly declined.

From Canada, we have the CPIs for July. The headline rate is anticipated to have inched up to +3.4% yoy from +3.1%, while no forecast is available for the core rate. At its prior gathering, the BoC appeared less hawkish than expected, saying that they continue to see the output gap closing in H2 2022, which suggests that their expectations over when they may start raising interest rates have not come forth.

What’s more, the latest employment report disappointed, and thus, we don’t expect the inflation data to raise drastically speculation over an earlier action by the BoC. We believe that more Canadian data may have to come in on the bright side for market participants to start increasing bets on that front. Canada_CPIs
On Thursday, Australia releases its employment report for July. The unemployment rate is forecast to have ticked up to 5.0% from 4.9%, while the net change in employment is expected to show that the Australian economy has lost 45.0k jobs after adding 29.1k in June. In our view, this will be another soft data set coming out from Australia, which could add to speculation for a dovish RBA for longer, and perhaps keep the Aussie under selling interest. 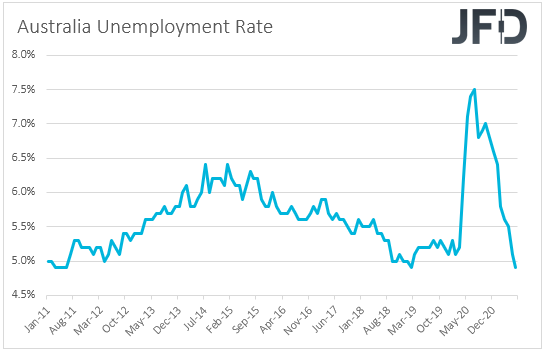 AU_unrate
Finally, on Friday, during the Asian session, we get Japan’s CPIs for July, while later in the day, we have UK and Canadian retail sales for the same month. No forecast is available for Japan’s headline CPI rate, but the core one is anticipated to have ticked up to -0.4% yoy from -0.5%. Both the UK headline and core retail sales are expected to have increased at the same pace as in June, while Canada’s sales are expected to have rebounded strongly. 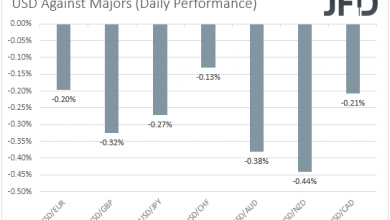 U.S. Dollar Slides As U.S. CPIs Slow Down In July 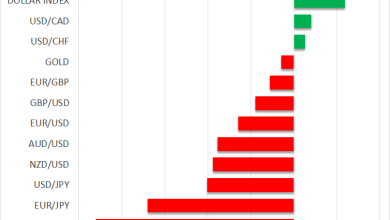 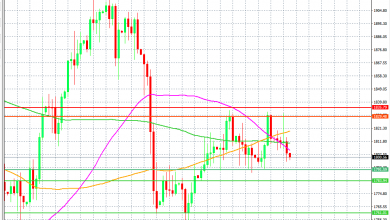 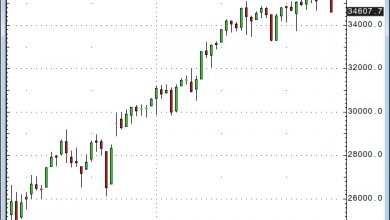 Trading Desk Notes: We May Have Seen The High For The Year