Following the European Central Bank (ECB), the Bank of Canada (BoC), and the Bank of Japan (BoJ) decisions last week, we have three more major central banks announcing their own policy decisions this week.

Those are the Reserve Bank of Australia (RBA), the Federal Open Market Committee (FOMC), and the Bank of England (BoE). No policy change is expected from the RBA, but participants are eager to determine whether officials will change their forward guidance.

The FOMC could start trimming its QE purchases, while the financial community sees an 80% chance for the BoE to hit the hike button.

Monday is a relatively light day. The only releases on the schedule worth mentioning are the final Markit manufacturing PMIs for October from the UK and the US, which are expected to confirm their preliminary estimates. And the ISM manufacturing index for the month is forecast to have declined somewhat, to 60.5 from 61.1.

On Tuesday, during the Asian session, The RBA will announce the first central bank decision of the week. Last month, policymakers of this bank kept all their policy settings unchanged.

They repeated that they will continue to purchase government securities at the current pace until at least mid-February. They also maintained the view that interest rates are unlikely to rise before 2024. 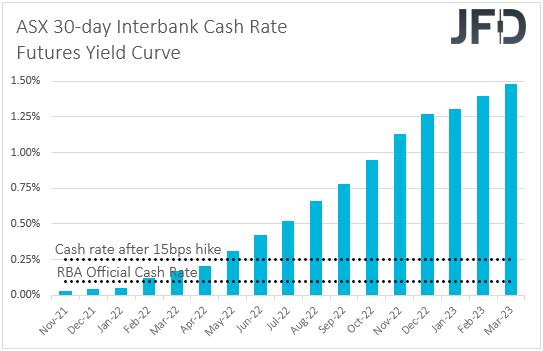 Having said that, though, according to the ASX 30-day interbank cash rate futures yield curve, recently, market participants have raised bets that interest rates could start rising at some point in the middle of next year.

Following the last week’s acceleration in underlying inflation metrics, they now even see the benchmark rate hitting 1.25% by the end of next year. On Friday, the RBA declined to defend its bond-yield target, which may have been a signal that it now intends to tighten monetary policy much faster than previously thought.

Therefore, although we don’t expect any policy change at this gathering, we will pay extra attention to the accompanying statement to see whether the forward guidance on interest rates has changed or not. In our view, the risks surrounding the Aussie‘s reaction are tilted to the downside.

Even if officials signal they now expect to start lifting rates next year, they may not match market bets on subsequent hikes. The market is already very hawkish, and this leaves ample room for disappointment. As for Tuesday’s data, we have Eurozone’s final manufacturing PMI and Switzerland’s CPI, both for October.

On Wednesday, the FOMC is expected to release a statement. When they last met, US policymakers kept their policy untouched. Still, in the statement accompanying the decision, they said,

“If progress continues broadly as expected, the Committee judges that a moderation in the pace of asset purchases may soon be warranted.”

What’s more, the new “dot plot” pointed to 9 members in favor of rate increases to start next year and 17 supporting higher rates in 2023. Remember that back in June, the respective numbers were 7 and 13. 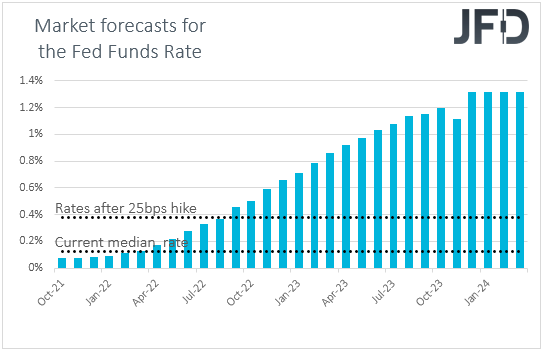 Since the latest gathering, several policymakers have been adding fuel to expectations over a November tapering start, while the better-than-expected earnings results suggested that the US economy was not affected by the latest bottlenecks as many may have believed.

This, combined with the fact that inflation continued to accelerate in September, well above the Fed’s objective of 2%, allowed market participants to consider a tapering start at this meeting as a done deal, while they brought forth their bets with regards to the first interest rate hike.

According to the Fed funds futures yields, they are now nearly fully pricing in a 25 bps hike to be delivered in August 2022, while a few weeks ago, such a move was expected in the first months of 2023.

We expect the committee to begin tapering this week, and bearing in mind that at the previous press conference, Chair Powell noted that a gradual tapering process could conclude around the middle of next year, we expect a pace of $20 billion.

Now, given that the financial community essentially anticipates a tapering, all the attention is likely to fall on the statement accompanying the decision and Powell’s press conference for comments on inflation and hints on interest rates.

Anything suggesting that inflation could stay elevated longer than anticipated and that interest rates could start rising soon after the tapering is over could support the US dollar. The opposite may be true in case policymakers try to push back against interest-rate pricing.

As for the rest of Wednesday’s events, during the Asian session, we do get New Zealand’s employment report for Q3. The unemployment rate could slide to 3.9% from 4.0%, but the employment change could slow to +0.4% QoQ from +1.0%.

That said, the labor cost index is anticipated to rise to +2.6% YoY from 2.2%, which combined with a downtick in the unemployment rate would paint a relatively optimistic picture.

So, following the Reserve Bank of New Zealand (RBNZ) decision to hike rates at its latest meeting and signal that further removal of policy stimulus is expected over time, a decent report could strengthen the case for more rate hikes and thereby prove positive for the Kiwi. 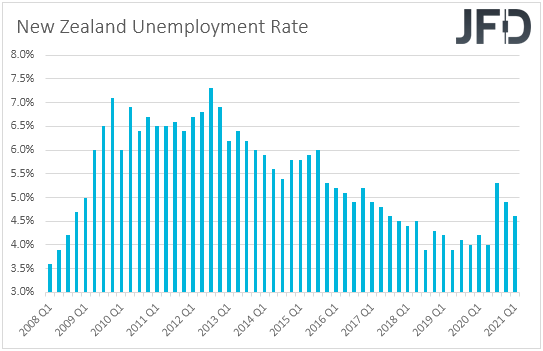 Japanese markets will stay closed due to Culture Day, while from China, we get the Caixin Services PMI for October, but no forecast is available. Later in the day, we have the final Markit services and composite PMIs for October from the UK and the US and the ISM non-manufacturing index for the month.

The final Markit prints are expected to confirm their initial estimates, while the ISM index is anticipated to have increased to 62.1 from 61.9.

On Thursday, it’s the turn of the BoE to decide on monetary policy. Back in September, this bank kept all its policy settings unchanged, but in the statement accompanying the decision, it appeared very confident on interest rate increases.

Officials noted that some developments had strengthened the case for a modest tightening over the forecast period. They added that this should come in the form of a rate hike, even if that becomes appropriate before the QE ends. 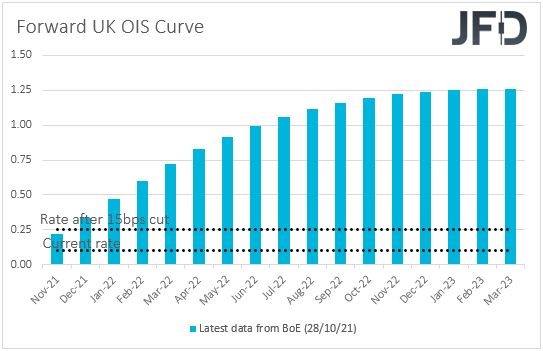 Recent data showed that inflation in the UK slowed more than anticipated in September, but both the headline and core rates stayed well above the BoE’s objective of 2%.

This, combined with the fact that Governor Andrew Bailey and MPC member Michael Saunders have expressed willingness to push the hike button very soon, prompted market participants to assign an 80% chance for a 15 bps hike to take place at this gathering, according to the UK OIS forward yield curve.

Therefore, a 15 bps hike by itself is unlikely to move the pound much. We believe that if indeed the bank lifts rates, market participants will quickly turn their attention to the statement, the meeting minutes, the bank’s updated economic projections, and voting over a hike.

If the decision is a close call, and the language and projections point to a slower rate path than the OIS curve suggests, then the pound could pull back.

Due to the recent supply shortages in the UK that appeared to have left their mark on the economy, officials could refrain from hitting the hike button now and perhaps wait until next month, a decision that could result in a more substantial selloff in the pound.

In our view, for the pound to rebound, the BoE may have to appear more optimistic than the current market pricing suggests. In other words, it has to deliver a hike and signal that more could follow.

So, overall, we see the risks surrounding the pound’s reaction to the meeting as tilted to the downside. Elsewhere, we have Australia’s trade balance and retail sales for September and Q3, respectively, as well as Eurozone’s final services and composite PMIs for October.

Finally, on Friday, the main item on the agenda may be the US employment report for October. Nonfarm payrolls could rebound to 413,000 after falling to 194,000 in September, while the unemployment rate is expected to have ticked down to 4.7% from 4.8%. 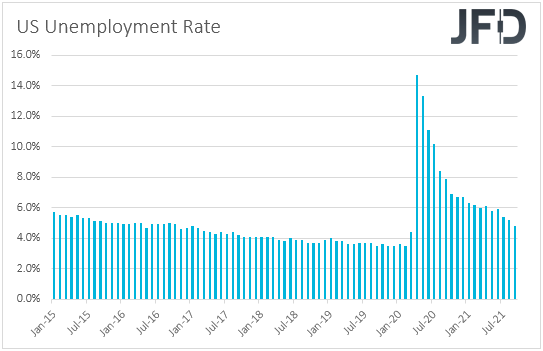 Overall, the numbers point to a decent report, but how the market will respond may be conditional upon the FOMC decision. Suppose the Fed signals that inflation could stay elevated for longer than they have previously assumed and that this could lead to rates rising sooner.

In that case, a good employment report could add credence to that view and allow some more US buying. However, the big question is: How will the stock market respond? Will it slide due to expectations of faster rate hikes, which could hurt firms’ profitability, or will it rise on signs that the US economy is performing better than many may have recently feared due to the latest supply shortages?

In our view, although the former has been the case in the past, we believe that lately, it’s been the latter. Thus, we expect decent jobs data to help stocks drift further north.

At the same time, with the US NFPs, we also get the employment report for October from Canada. Expectations are for the unemployment rate to slide to 6.8% from 6.9%, but for the net change in employment to show that the economy has added fewer jobs than in September.

With the BoC unexpectedly ending its QE program last week, officials may be now scratching their heads on when the appropriate time for a rate increase may be. The financial world anticipates such a move early next year, and in our view, a slowdown in jobs growth for just a month is unlikely to change that, especially if the unemployment rate indeed slides. 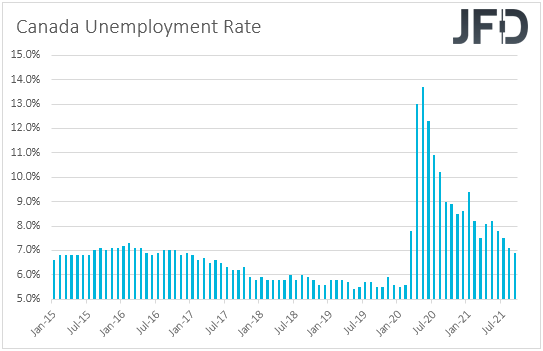 Therefore, we believe that the CAD will stay primarily linked to oil prices. The next event concerning the energy market is the gathering between the OPEC+ group, which is scheduled for Thursday. That said, the official outcome could become public on Friday.

Although the group is under pressure from the US to increase supply, several members appear unwilling to do so. One of the latest headlines points to Algeria, saying that output should not exceed the current agreement of 400,000 BPD because of market uncertainty and risks.

Therefore, the base-case scenario is for no change, which is unlikely to affect oil prices much. In our view, it will just allow the current uptrend to continue slowly. For oil prices to slide notably, the group may need to surprise the markets by announcing increased quotas.

There is also chatter that they may double production in November but keep it unchanged in December. However, we don’t see this as a material change, and we would expect the effect, if any, on oil prices to be temporary. 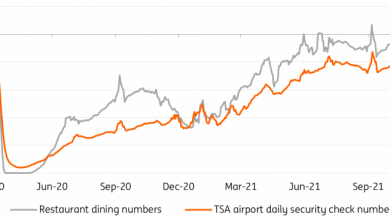 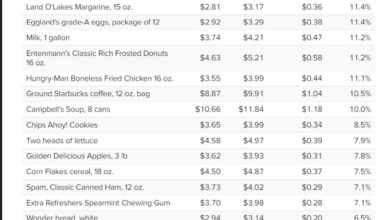 The Hawks Are Circling. How To Protect Your Portfolio 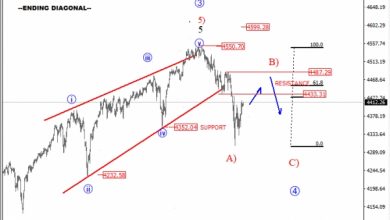 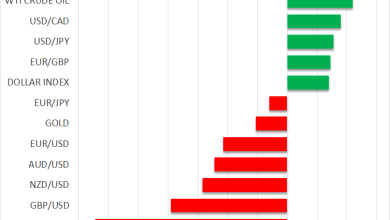 Fed Slams On The Brakes, BoE Decision Next