In his book and movie, The Big Short, Michael Lewis tells the story of a few intelligent and courageous investors that saw what no one else wanted to see. Instead of turning a blind eye to absurdity, they did their homework. What they quickly found was many subprime loans were likely to default. These investors were laughed at by Wall Street’s “best and brightest” simply for betting on an obvious truth.

Myopia and fat profits clouded the ability of many investment professionals to see the housing bubble. Worse, well-educated Ph.Ds at the Fed, charged with preventing financial instability, had the same blind spot.

Now, a decade later, a much larger problem is brewing. Once again, those on Wall Street and the Fed do not see the debt elephant in the room. Maybe worse, they see it but perpetuating the problem serves their interests best.

In 2008 the sub-prime mortgage market crashed for several reasons. Chief of them, borrowers were ill-equipped to make mortgage payments if interest rates rose or incomes got compromised. Equally problematic, the collateral (home prices) backing the loans were grossly overvalued.

Federal debt, while vastly different than private debt, is equally unsustainable. The graph below helps quantify the fiscal problem. 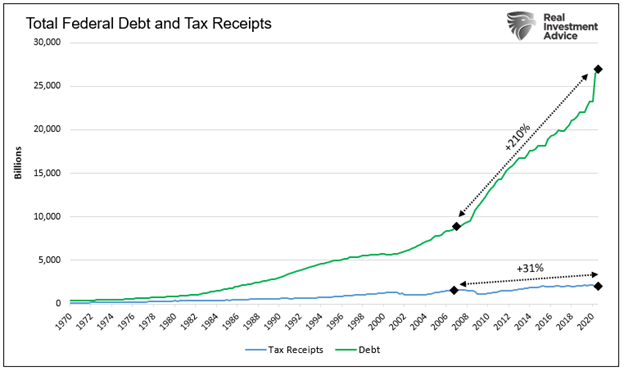 We could write pages on the many ways the government could reduce deficits. Why bother? It is a waste of our time and yours. The answer, some combination of higher taxes and reduced spending, is a pipe dream. Politicians’ intent on holding office know higher taxes reduce the chances of reelection and showering government funds on the public wins votes.

The graph below shows over the last 50+ years, personal and corporate tax rates have trended lower. Moreover, both Democrats and Republicans have presided over lower tax rates despite increasing shortfalls between tax revenue and debt. 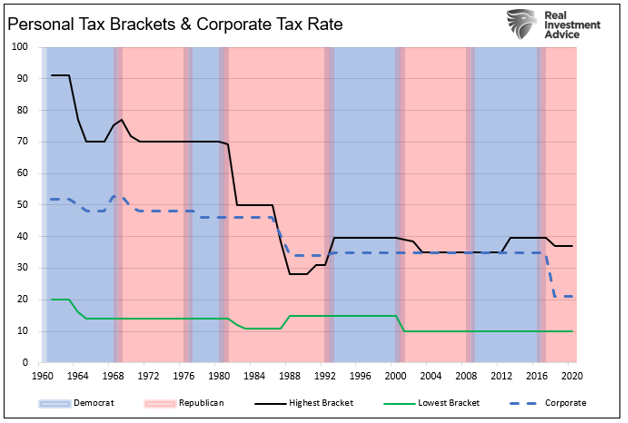 So, if the government intends to spend at an increasingly greater rate than tax revenue growth, a new funding source is required. Traditionally, Treasury debt funds the deficit. The problem with relying on debt is that progressively larger debt loads push interest rates higher, complicating the situation. The amount of debt that investors are willing and able to take at a reasonable cost is limited.

Enter the magician. Since 2008, the Fed has helped fund the deficit via QE. The Fed now holds nearly a quarter of all outstanding federal debt. It is as if $5 trillion of Treasury debt was never issued. The Fed also has another $3 trillion of mortgage, agency, and corporate debt. 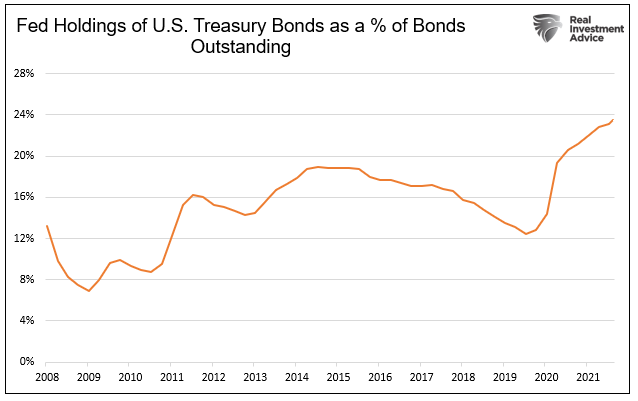 Fed Holdings Of US Treasury Bonds

In Willful Blindness, we wrote the following:

Fed magic allows for cheap funding of deficits. What could go wrong?

Over the last 15 years, debt has grown at 7x the rate of tax receipts and over 4x more than economic growth. The divergence between federal debt and the ability to pay for it accelerated during the subprime crisis and is accelerating again due to pandemic-related multi-trillion-dollar deficits.

Are the odds of perpetually increasing the gap between spending and tax revenue any better than the Miami stripper, featured in the Big Short, making good on her loans on five houses and a condo?

While the problem is obvious, it appears the Fed, government, and just about every banker opt to ignore it. Even those who understand the problem tell the public now is not the right time to address it. Instead, there always seems to be a more pressing issue requiring more debt which perpetuates the problem.

No one wants to solve the deficit problem because the cost of fixing it involves short-term financial and economic pain. The hurt is likely too detrimental to the careers, wallets, and egos of bankers and politicians.

To answer our question comparing Uncle Sam and the Miami stripper: No, the odds are similar, but the government has a much longer runway to perpetuate its shenanigans.

The Cost Of Magic

Unlike the stripper in Miami and other overleveraged homeowners, the Fed can monetize federal debt pushing interest rates even lower. As we see in Europe, with negative interest rates, there are no limits to the madness.

The problem is the Fed’s magic comes with a cost.

For starters, savers, including a large chunk of baby boomers and retired people, must take on unacceptable levels of risk to compensate for zero interest rates on their cash.

As we wrote in Willful Blindness:

fiscal spending will only widen the wealth gap and further slow economic growth, as it has done in the past. At the same time, said policies drive more people to seek shelter from the rapidly devaluing dollar. As a result, speculative

Ignoring history and logic may be expedient, but it only aggravates our societal and economic shortfalls.

For more on why the Fed’s antics to push interest rates obscenely low are damaging, our article Wicksell’s Elegant Model is worth reviewing.

Michael Bury and others prospered by ignoring politicians, the media, and Wall Street. They uncovered the simple truth behind the subprime bubble. The sad fact of America’s fiscal position is just as easy to see for those willing to look.

Unlike the Big Short, our story is not as easy to time. As debt grows beyond our means, economic growth will continue to slow. The Fed will perform its magic and fill the funding gaps. But, like any Ponzi scheme, it either gets bigger, or it fails. This one will get bigger, and it will fail.

As investors, we must understand what the Fed does and take advantage of its near-term benefits to asset prices. However, while others stay asleep at the wheel thinking this is normal, we must remain prepared for the end game, whenever it may occur. 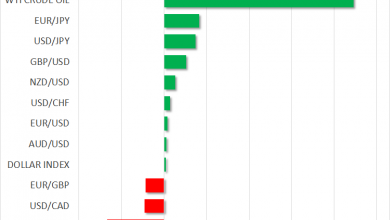 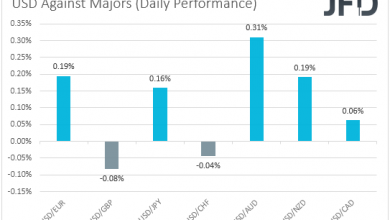 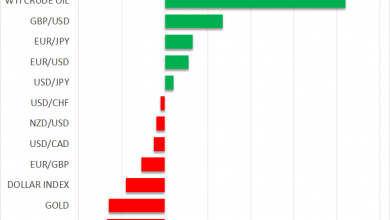 U.S Inflation Under The Microscope